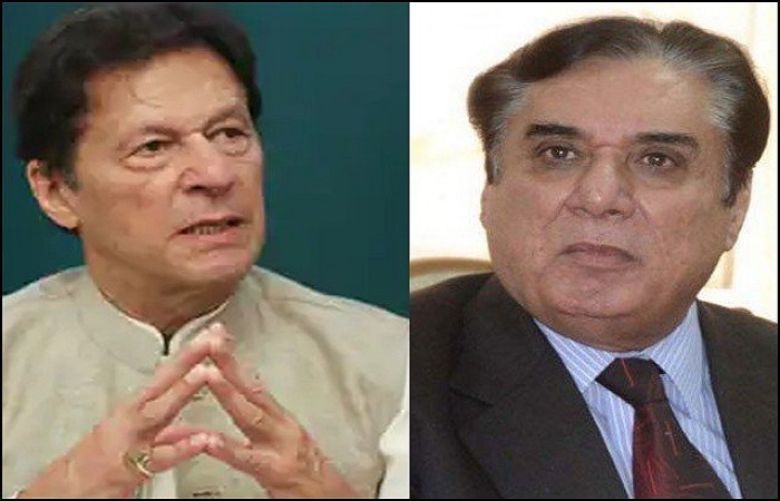 An in-camera session of the PAC was scheduled to be held today under the chairmanship of MNA Rana Tanveer Hussain, which the NAB chief did not attend.

The reason for Iqbal’s absence was revealed in a letter written by NAB to the secretary of the assembly, that stated that PM Imran had approved “that the Director General would represent Chairman NAB in his capacity of Principal Accounting Officer, before the Parliamentary Committees, including the PAC, Constitutional and Statutory Bodies”.

The letter maintained that the decision was made “in view of the statutory functions and responsibilities of the Chairman NAB”.

Taking exception to the letter, PAC Chairman Rana Tanveer stated that he would write a letter to the Cabinet Division to verify NAB's letter.

He added that the if the rules give the premier the power to choose the DG as a representative in place of the chairman then the committee will accept the letter.

Tanveer further said that the position of the chief justice of the Supreme Court was different from that of the NAB chairman, claiming that the latter should be held accountable.

“If the government does not hold him accountable, there will be abuse of law. The money spent by the NAB chairman during his tenure will have to be accounted for,” he maintained.

According to the PAC chairman, the cabinet secretary should have informed him by telephone and in writing whether the notification has been made in accordance with the law, and not because they are "dear to the prime minister".

He stated that they would have to observe what the law says, adding that the government should keep in mind that this would have “far-reaching impacts”.

Member National Assembly Noor Alam Khan - who is a member of the Pakistan Tehreek-e-Insaf - in conversation with media said that the meeting was convened on the request of the NAB chairman, who had claimed that he would be present, and had even picked the date for the meeting himself.

He claimed that it was wrong to involve the premier, because if the letter was from PM Imran then it would have come from his secretariat or the Cabinet Division.

“NAB cannot write letters to the National Assembly,” he said.

Pakistan Peoples Party Senator Sherry Rehman stated that the NAB chairman had himself last week asked the PAC to hold an in-camera meeting, where he said he would present the recovery figures himself.

“This was a sensitive matter and all of us abandoned our work to come to this meeting because our party also highlighted the meeting’s importance,” she said.

The senator maintained that the meeting was set according to the NAB chairman’s request, on his chosen date, and was in-camera because he had requested it to be.

“We received a letter overnight regarding this decision,” she told the media.

Taking to Twitter, Sherry Rehman added that “all members across the board with consensus found this unacceptable and advised the Chair PAC to terminate the meeting”. She further stated that “no one is above the law”.

PPP MNA Naveed Qamar also claimed that thet NAB chairman did not want to be held accountable by parliamentary leaders, rather wanted them to to be accountable before him.

“The federal cabinet does not have the power to bar the NAB chairman from attending the PAC,” he added.

In a previous hearing, NAB chairman had assured the PAC that he would go home if he couldn’t satisfy it about the appropriation of accounts and progress report on NAB recoveries since its inception, in an in-camera briefing slated to be held on January 6, 2022.

The assurance had come after the PAC had grilled him over unauthorised excess expenditure while suggesting to get it regularised from the National Assembly in the upcoming mini-budget as otherwise the amount was recoverable from NAB.

During his last appearance before the highest accountability forum of the parliament, the NAB chairman had categorically said that there shouldn’t be any doubt that parliament was a supreme institution, adding his earlier absence didn't mean that he was a king who can’t appear before PAC.