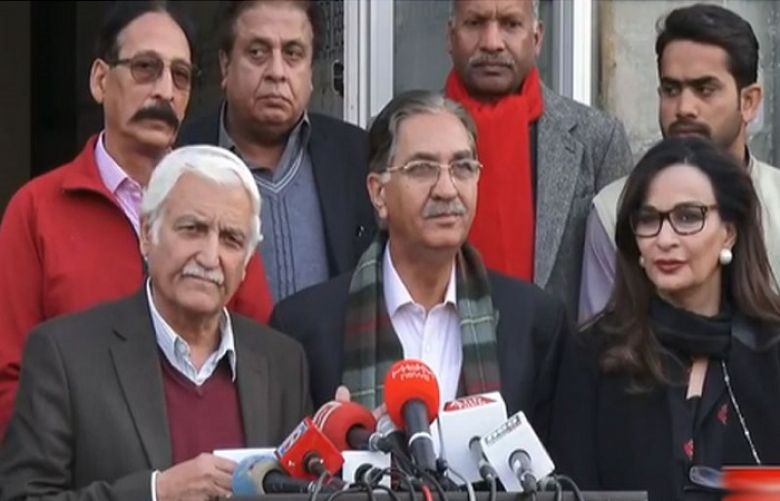 The PPP has alleged that while it still wishes to rid the people of the government, the PML-N and JUI-F chief Maulana Fazlur Rehman wish to give PTI a chance to complete its five-year term.

In a press conference in Islamabad on Saturday, party members Farhatullah Babar and Nayyar Bukhari said that whichever party still wishes to continue the protest movement against the government is welcome to join the PPP.

Following the PPP leaders' remarks, JUI-F's Hafiz Hamdullah said that his party, as well as the PML-N, are part of the Pakistan Democratic Movement alliance.

He turned the PPP's statement around to allege that it is the PPP that is the PTI's "B team".

"Peoples Party no longer has the Bhutto-ism of the yesteryears," he said, adding: "It has become Zardari's party."

Tensions between the PPP and PML-N — considered the two biggest Opposition parties in Pakistan — have been on the rise since PPP's Yousaf Raza Gillani was appointed Leader of the Opposition in the Senate.

Gillani's appointment drew the ire of PDM, an alliance of the Opposition parties, which said that the move was made without its blessing.

PML-N Vice President Maryam Nawaz maintains that at the time of the Senate chairman election, it was "decided" that with the PPP running for the seat, the PML-N will be given the Leader of the Opposition in the Senate position.

PPP rounded up 30 senators to get Gillani appointed to the Opposition leader position.

The numbers comprised 21 senators from the PPP itself, 2 senators from the Awami National Party, 1 senator of the Jamaat-i-Islami, 2 independents from FATA and a group of 4 'independents' led by Senator Dilawar Khan that had broken away from the Balochistan Awami Party to support Gillani's candidature.

Over seeking the support of government allies (members of BAP), the PDM had issued show-cause notices to the PPP as well as ANP, a move that was considered highly offensive by both parties and resulted in them quitting the alliance.

Mudslinging between both parties, following the break up, has continued and the rift seems to be widening over time.

Recently, in the NA-249 by-election in Karachi, the PPP and PML-N fielded their separate candidates with PPP's Abdul Qadir Mandokhel winning the race. PML-N has accused the PPP of stealing the election.

PPP has demanded proof of the allegations and gone so far as to name the PML-N as the "original selected" and "only second to PTI in its selectedness".

PDM chief Maulana Fazlur Rehman has twice said he wishes to give PPP and ANP a chance to return to the fold.

Reports of him attempting to bridge the gap between the parties emerged earlier this week.