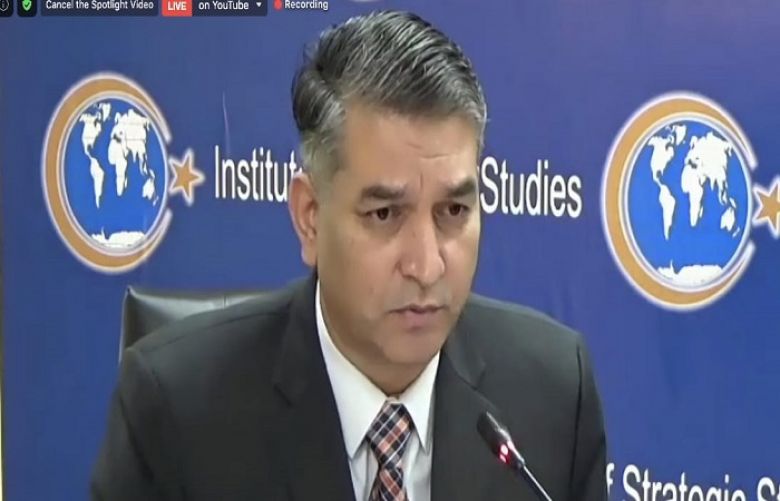 Director CMEA, Ms. Amina Khan opened the panel discussion by stating that the Belt and Road Initiative (BRI) is a mega-project focused on increasing connectivity by opening up avenues for diplomatic and economic activity, thereby cementing trade and commercial ties between China and partner countries.

In the case of the Middle East, this can be evidenced in the sharp increase in trade between China and the Middle East countries. Chinese investment in the Middle East focuses on infrastructure, construction, agriculture, finance, however the energy sector remains the substratum of China's associations with the region.

Both sides have mutual interests in integrating the BRI into national regeneration schemes, such as Saudi Vision 2030, UAE Vision 2021, Jordan 2025, Turkey's Middle Corridor and Kuwait's Vision 2035. She went on to say that it is a similar story in Africa. China has taken a multi-pronged approach in its economic relations with Africa, as it is a significant source of foreign direct investment.

In 2019, Beijing announced a $1 billion Belt and Road Africa infrastructure development fund as well as a $60 billion African aid package in 2018. Moreover, the ‘Extraordinary China-Africa Summit on Solidarity Against COVID-19’ held in June 2020, has further strengthened ties between China and the African bloc.

Answering a question regarding China’s overall role in the Middle East, Ambassador Aizaz stated that there are three dimensions of China’s regional approach, the economic, political and security dimensions.

The economic dimension is more dominant than the other two. The Western analysts often perceive China in the Middle East in a more negative light although its security engagement in the region is quite minimal.

Commenting on China’s perception in the African continent, he said that the African countries view China as a good investor while there is also stiff competition between China and Africa’s traditional partners such as the US and France.

While commenting on China’s overall Foreign policy approach towards the Middle East, Ms. German said that apart from increasing investments, China is also cognizant of ensuring the safety of its citizens residing in different countries of the region.

She further remarked that China’s regional preference is peace, stability, with a cautious approach to conflict resolution. It becomes engaged in a process but does not play a decisive role. China has a growing role in African security as can be seen in its collective naval drill and anti-piracy missions. Ms. German observed that China’s economic relations with the African continent are based on win-win cooperation as without building infrastructure in these countries, it would be impossible to attract any foreign investment.

Ambassador Khalid was of the view that China is slowly gravitating towards the Middle East and Africa region with the main focus being on the energy sector. China’s appetite for energy resources since China’s demand for oil and gas is increasing. Ambassador Khalid said that at present China’s role in the region is purely economic because of China’s policy of non-interference. It is only natural that in order to safeguard its stakes in the region, China has to maintain some sort of presence in the region, which it does through bases in Djibouti and peacekeepers in Sudan. He was of the view that China has let the US take a lead in playing a security role in the region and instead has focused on economic development.

While answering various questions, Dr. Zahid said that energy is a key driver of China's relations with the Middle East. It has shown no desire to interfere or influence the US dominated security infrastructure in the region. A lot of China’s role will also depend on how US allies such as India shape their policy in the Middle East so while US withdrawal will provide space to China, it is likely that China and India will be locked in a battle for influence. Regarding Africa, he said there is now a Chinese role in Africa albeit minimum.

He said that pragmatism and flexibility are two main characteristics of China’s foreign policy. Making his observations on a question on prospects for Pakistan is not just a passive actor in the Pakistan China relationship and considering Pakistan’s strong relationship there are sure to be avenues.

Dr. Talat talked about China's policy in the Middle East and Africa, and said it is also driven by China’s overall global approach. China wants a shared future of prosperity for its partners. This also extends to the Middle East countries.

China’s vision focuses on expansion of trade links in the region and follows its policy of non-interference in countries’ political rifts strictly. There is a thought process in Chinese scholarship that if China gets involved in the security matters of the region, it will be detrimental to the win-win narrative China propagates. Commenting on the prospects of Sino-Pak cooperation in the African continent in the backdrop of Pakistan’s Engage Africa policy, Dr Talat said that this was a timely initiative by the Pakistani government and would provide abundant opportunities for joint outreach to African countries.