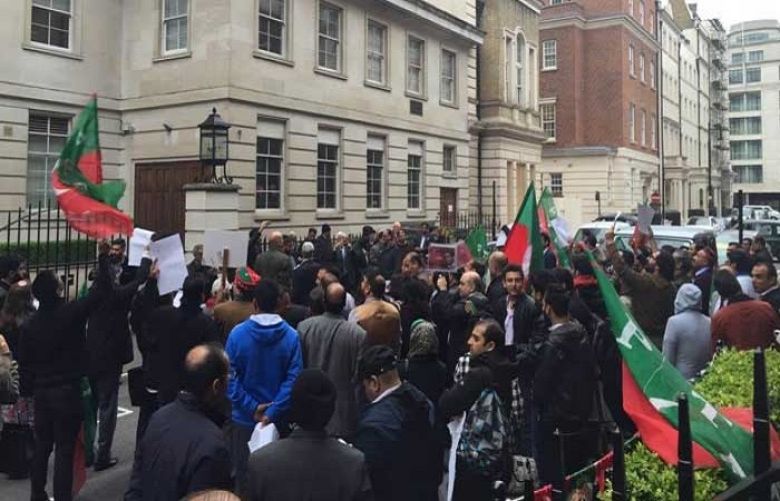 Around 20 workers of PTI assembled outside Copthorne House from where Nawaz Sharif made his speech to the rally.

Zakir Said Sahil, who is Khyber Pakhtunkhwa (KP) government’s focal person in the UK and PTI UK’s additional secretary until recently, said he had organised the protest against the former premier and his political activities from London.

PTI workers raised slogans against Nasir Butt who was among the supporters of Nawaz Sharif present at the protest.

Sahil told that the PTI will continue to organise protests against Nawaz Sharif until he returns to Pakistan. He said Nawaz was allowed by PM Imran Khan to travel abroad on medical grounds but instead of returning to Pakistan, he is now involved in politics from London and “making speeches against Pakistan’s institutions”.

“Nawaz Sharif wants Pakistan put on FATF’s black list through his speeches. He should go back and face the courts” He added.

PML-N’s Shakoor Khan said that the PTI organised the protest secretly on phone and through a WhatsApp group so that PML-N activists don’t get to know about it.

He said “We had come here just to show support for Nawaz Sharif and then we saw PTI officials gathering outside. Last time we had outnumbered them and we can do that anytime when needed. We don’t use cowardly tactics."

Shakoor Khan claimed that the PTI government organised this protest and funds were provided to the protestors.

He further claimed PM Imran Khan’s advisor Sahibzada Jahangir had confirmed the same during the last protest, that he had organised it on Imran Khan’s instructions. "Such is their level,” he remarked.

A police vehicle remained on the scene for about an hour and the protestors from both sides dispersed peacefully after a while.