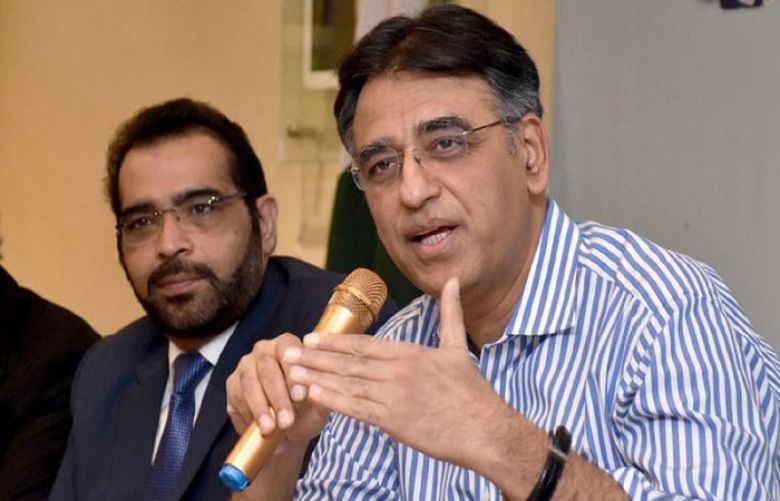 Federal Minister for Planning and Development Asad Umar on Saturday slamming PML-N supremo Nawaz Sharif said that the former premier "has a problem with state institutions and not just individuals".

The federal minister was responding to Nawaz Sharif's speech delivered at the Pakistan Democratic Movement's Gujranwala jalsa, where the former premier had lashed out at state institutions and the government.

Addressing a press conference along with federal minister Ali Zaidi, he said: "Mian sahib, your threats won't work now. The time for questions has passed, and now you have to answer."

"If you are truly brave, why couldn't you speak about [Indian spy] Kulbhushan Jadhav [...] Why don't you lash out at India?" he asked.

Umar said that Nawaz had started talking about democracy after he "saw failure" everywhere else.

The federal minister asked Nawaz Sharif why he sent his envoys for meetings, adding that Shahbaz Sharif and other PML-N leaders were asking for an NRO.

Slamming Nawaz for directing questions at certain powerful individuals in his address at the Gujranwala jalsa, Umar said: "You [Nawaz] are an indicted criminal, you do not get to ask questions."

Talking about Prime Minister Imran Khan's speech to the Tiger Force where he mentioned Maryam Nawaz, Asad Umar said: "Nani [grandmother] is a relationship of immense respect; has the prime minister said anything wrong?"

The federal minister also welcomed the Opposition leaders to Karachi.

Taking over the presser, Ali Zaidi said that a "new Imran Khan" has now emerged, after the Opposition's recent tactics.

The federal minister urged the Opposition parties to not drag institutions into their political speeches.

"The Opposition is running a 'save our corruption campaign'," Ali Zaidi said, adding: "We will bring the law into action and bring back Nawaz Sharif."

Ali Zaidi also criticised capt (retd) Safdar for chanting slogans in the presence of Maryam at Mazar-e-Quaid, saying: "He should apologise for such an act."

These "criminals" have "violated the sanctity of Mazar-e-Quaid", he added.