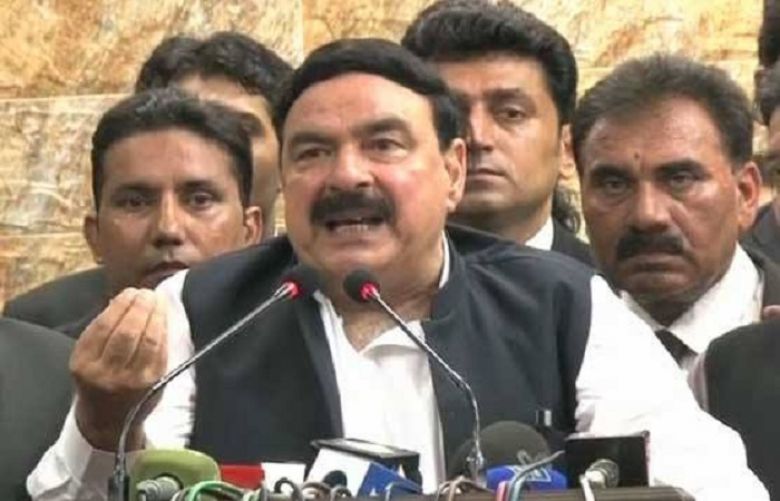 Federal Minister for Railways Sheikh Rashid Ahmed on Saturday demanded PML-N supremo Nawaz Sharif to share the “number of calls” he allegedly made to Indian Prime Minister Narendra Modi from "outside Pakistan" and share the "agenda" of those calls.

“Why did you call the head of the enemy state India from outside Pakistan. Did you feel threatened that your calls were against national security and will be leaked?” asked Rashid in a press conference in Lahore.

“Nawaz Sharif should tell who gave the address of Ajmal Kasab to India,” said Rashid in reference to the Mumbai attacks accused.

Rashid also posed a number of questions before the media that he wanted former prime minister Nawaz Sharif to answer.

He asked Nawaz to come clean regarding the money he allegedly took from Osama bin Laden in the form of charity.

The minister also asked the former premier to tell the nation that who sent the busses filled with “attackers” to target former chief justice Sajjad Shah.

Rashid also said that former premier talks about the vote but does not talk about court.

“You made an excuse of illness and left the county.”

The minister slammed the PML-N supremo for making speeches against Pakistan’s national security and institutions.

Nawaz was first denying the existence of Dawn leaks but has admitted it now, he said.

Rashid also blamed the former premier from taking money from Qatar for elections.

The minister claimed that the PML-N planned the attack on NAB’s Lahore office in London.

The minister said that he was leaving with these questions and hoped that the PML-N respond to these by Monday.

On the meeting between, Chief of Army Staff Gen Qamar Javed Bajwa and PML-N leader Mohammad Zubair, he said that he was present in the meeting in which former prime minister Nawaz Sharif and his daughter Maryam Nawaz were discussed.

He added that the Pakistan Army was standing shoulder to shoulder with the civil government.