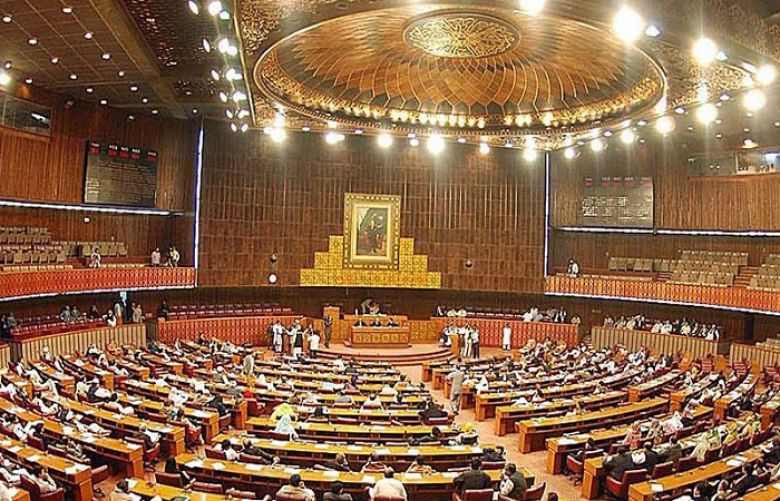 The government on Wednesday managed to pass three crucial Financial Action Task Force (FATF) related laws in a joint session of the parliament that was marred by the opposition's protests.

As soon as the session began, Adviser to the Prime Minister on Parliamentary Affairs Dr Babar Awan tabled the Islamabad Capital Territory (ICT) Waqf Properties Bill which was initially passed through a voice vote.

However, the NA speaker asked for a vote count with members being asked to stand up from their seats after the opposition shouted in protest. The bill was passed with 200 members voting in favour and 190 voting against it.

A clause by clause reading was done with each clause being approved by the house. Amendments to certain clauses were proposed but rejected by the house through a voice vote. The ruckus continued as opposition members chanted slogans during the voting on amendments in the clauses of the bill.

JI Senator Mushtaq Ghani, who introduced amendments in several clauses, angrily accused the speaker of "passing legislations illegally". He also claimed that the speaker had not allowed him to speak on his turn.

Opposition members also insisted on speaking while amendments were being introduced but Qaiser insisted that only lawmakers who wanted to move amendments should address the parliament. When opposition lawmakers continued to make noise, the speaker asked Awan to read out the rules regarding addressing while voting was underway. According to Rule 130, Awan said, only lawmakers who wanted to move amendments were allowed to speak while voting was underway.

Amid the racket, PTI MNA Maleeka Bokhari introduced amendments in several clauses of Anti-Money Laundering (Second Amendment) Bill, all of which were passed.

While Bokhari was reading out proposed amendments, the opposition walked out. The Anti-Money Laundering (Second Amendment) Bill, which was then tabled by Awan, was also passed through voice voting without any opposition.

According to the ATA (Amendment) Bill, 2020, the investigating officer, with the permission of the court, can conduct covert operations to detect terrorism funding, track communications and computer system by applying latest technologies in 60 days. The bill was rejected by the Senate earlier today.

After the parliament passed the bills, the prime minister thanked lawmakers who voted in favour of the legislations for "standing with their country".

During his address to the parliament, the prime minister said that the opposition's "attitude" in the session today and earlier negotiations on the bills showed that the "interests of [opposition parties] and their leaders were the opposite of Pakistan's interests".

"Going on the black list would mean sanctions, our economy crashing; we were hoping opposition would jointly pass legislation for FATF because it's for Pakistan, not [our] personal interest," PM Imran said.

The premier told the assembly that during the negotiations, the opposition had proposed 34 amendments in the NAB rules.

"They used FATF to protect their interests [...] when they saw we weren't being blackmailed, they got stuck on money laundering," he remarked. He criticised the opposition for suggesting that money laundering be excluded from NAB rules, saying that if they had nothing to hide, there should be no reason to oppose its inclusion.

He said it was "important to pass this legislation, not [just] because of FATF but money laundering". He recalled that he was asked to provide a money trail for an apartment he bought in London, even though he did not hold a public office at the time.

"If I, being a sportsman, can provide a money trail for the money that I brought into Pakistan, can't they (opposition) show a single document?" he asked.

"I want to tell the opposition that we are ready to compromise on everything for the [sake of] the country. But we will not compromise on corruption," he declared.

At the end of the prime minister's speech, NA speaker Qaiser also congratulated the house for the "historic legislation" and prorogued the session.

Earlier during the session, Awan had also tabled the Islamabad High Court (Amendment) Bill, 2019 in the house, which was passed without any opposition.

The house also passed a bill regarding the rights and inclusion of differently-abled persons in the society that was tabled by Human Rights Minister Shireen Mazari. The house was being chaired by Senate Speaker Sadiq Sanjrani at this point.

Earlier, PPP Senator Raza Rabbani had raised objections over Awan tabling the bill, saying that according to a court judgement, advisers do not have the power to move bills in the assembly. Law Minister Farogh Naseem, in response, said that the judgement quoted by Rabbani was regarding the special assistants of the prime minister.

Naseem said that there was no law against advisers tabling bills in the National Assembly, however, they cannot vote.

President Arif Alvi called a joint sitting of both houses of Parliament today and the government is trying to get the three FATF-related bills passed, sources had said.

These bills include the Anti-Money Laundering (Second Amendment) Bill, the Islamabad Capital Territory Waqf Properties Bill and the Anti-Terrorism Act (Amendment) Bill, 2020, all of which were previously rejected by the Senate.

Last month, the 104-member Senate had rejected the Anti-Money Laundering (Second Amendment) Bill and the Islamabad Capital Territory Waqf Properties Bill, both of which are also FATF-related, objecting to some of the provisions and linking its cooperation to retraction of remarks made by Leader of the House Dr Shahzad Waseem about certain leaders.

Earlier, during today's Senate session, 31 members had voted in favour of passing the bill on terror financing while 34 voted against it. The Anti-Terrorism Act (Amendment) Bill, 2020 was rejected a day after it was passed by the National Assembly, making it the third FATF-related legislation to have been blocked by the opposition-dominated upper house.