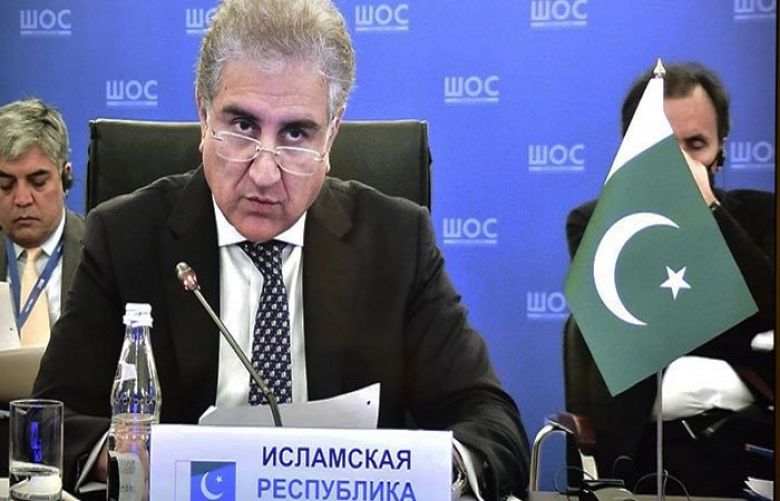 Foreign minister Shah Mahmood Qureshi on Thursday said that "it is cooperation not confrontation that should drive international politics".

In a series of tweets following his address at the SCO Council of Foreign Ministers meet in Moscow, Qureshi wrote: "In today's environment, full of zero-sum prophecies, it is cooperation not confrontation that should drive international politics."

The foreign minister said in his address to the forum he had reaffirmed Pakistan's belief in "the centrality of the Shanghai spirit" and said that platforms like the SCO "exist as a beacon of hope".

During his address, Qureshi said any unilateral and illegal measures to change the status of disputed territories "run counter to the Shanghai Cooperation Organisation's objective of amity in the region and must be opposed resolutely".

He said that he had stressed on the peaceful resolution of outstanding disputes as per the United Nations Security Council's resolutions.

Qureshi went on to share that he had "highlighted the opportunity to foster greater regional [co-operation] in this time of [COVID-19] crisis".

"Pakistan has flattened COVID-19 curve to become a global best practice," he said.

The foreign minister said Pakistan offered to share its strategy with member countries "in cognisance of the spirit of the SCO and working together against common threats".

In my address to the #SCO FM meet, reaffirmed Pakistan’s belief in centrality of Shanghai Spirit. In today's environment, full of zero-sum prophecies, it is cooperation not confrontation that should drive intl politics. Multilateral platforms like SCO thus exist as beacon of hope pic.twitter.com/GpxneDvgyY

He said that stability in Afghanistan "is vital for regional prosperity" and was discussed during the meet.

"Pakistan has assiduously supported efforts for peace and reconciliation that is Afghan led and Afghan owned," said the foreign minister.

"I stressed on SCO as key for connectivity and CPEC, flagship of BRI, supplements SCO vision for regional integration," he added.

According to a statement by the Foreign Office, Russian Foreign Minister Sergei Lavrov, the chair of the meeting, extended the invitation to the foreign minister.

“The Moscow SCO-CFM will consider more than 20 documents for subsequent adoption in the SCO Council of Heads of State. It will also adopt a Joint Communiqué reflecting member states’ unified stance on important regional and international issues,” the statement said.

The foreign minister will also have bilateral meetings on the sidelines of the CFM.

“SCO is an important forum for further enriching our deep-rooted historical and cultural links with member states, providing these ties a sound economic foundation, and promoting Pakistan as a regional trade and transit corridor,” the statement noted.

Since becoming a member in 2017, Pakistan has been “actively” contributing to working towards achieving SCO’s multi-sectoral agenda through participation in various SCO mechanisms.