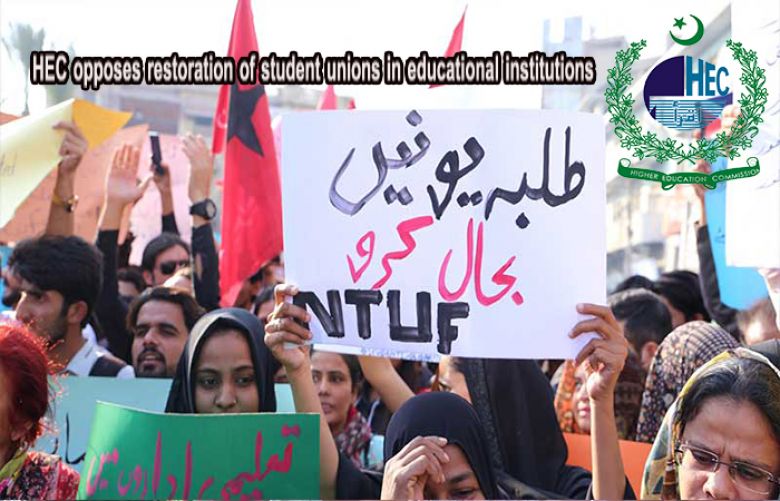 The Higher Education Commission of Pakistan has opposed the restoration of student unions in educational institutions despite demands from students themselves as well as a resolution passed by the Senate.

According to an HEC document, the commission does not support the restoration of student unions and instead proposes student associations on “healthy activities” such as poetry, debate, music and sports.

Tooba Syed, who was involved in the Student Solidarity March in Islamabad in November 2019, said the activities proposed by the HEC already exist.

“We want student unions to be restored to resolve issues being faced by students on campuses,” she said.
“What the students of this country need is student politics which guarantees the rights of students on campus and the right to political expression and dissent. The move to ban student unions was precisely to depoliticise the youth of this country so students have no say in the decision-making processes at university or at national level.

“We demand the right to student politics which truly represents the voices of the students and their issues on campus,” she said. Ms Syed added that students have a historical role in the development and evolution of any country and keeping them out is undemocratic and unconstitutional.

After students across the country protested calling for the revival of student unions last year, Prime Minister Imran Khan also expressed support for their restoration.

“We will establish a comprehensive & enforceable code of conduct, learning from the best practices in internationally renowned universities, so that we can restore & enable student unions to play their part in positively grooming our youth as future leaders of the country,” he said on Twitter.

In 2017, the Senate also adopted a resolution calling for the restoration of student unions, and former chairman Raza Rabbani gave a ruling after lawmakers on both sides of the aisle expressed concern over the continuing ban on student unions and called for an immediate revival.

Student unions were banned during the Zia regime and while adopting the resolution, senators said that banning student unions was a step to quell student voices against the Zia dictatorship.

The Supreme Court prohibited the formation of student unions and called for a proper mechanism if the government wanted to revive them. However, successive governments did not pursue the revival of traditional student politics, taking shelter under the judicial verdict.

The HEC, a regulatory body of higher education institutions, has opposed student unions in response to a bill moved by MNA Kesso Mal Kheeal Das to amend section 10 of the HEC Ordinance.

In his bill, the MNA said: “Notwithstanding anything contained in any law for the time being in force, any judgment or order of any court or authority, tribunal or a quasi-judicial authority, the commission shall make rules for formation, elections, purposes and code of conduct of student unions in institutions.”

Mr Das said in his bill that the absence of student unions has promoted violence on campus and stifled intellectual growth and social development.

“This amendment bill intends to revive student unions, so that a democratic culture could flourish in Pakistan. This bill, therefore, seeks to achieve the aforesaid objectives,” he said.

The bill will likely be taken up in an upcoming sitting of the National Assembly Standing Committee on Federal Education. In its response for the committee, the HEC stated: “The contents of the bill are not supported.”

The HEC said the restoration of student unions would deteriorate government efforts to reform universities because students would become involved in active politics, leading to partisan polarisation and even violence on campus.

“These unions through their affiliations with the political parties, make anti-government alliances, gain considerable influence & strength and pose a threat to academics, research and development work on the campuses,” the commission said.

“HEC has no objection to students having an interest in democratic process/system, indeed, as intelligent members of society, they should be well-informed. However, to drag them into active politics at the cost of their studies is not in the interest of the students themselves or the larger interest of the country,” the commission said.

Sources said the HEC’s perspective was not a finality and the standing committee could pass the bill and ignore the HEC’s argument.