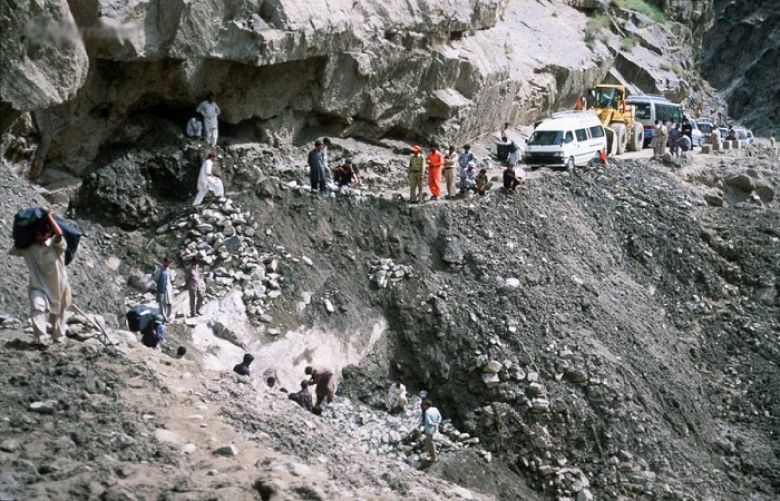 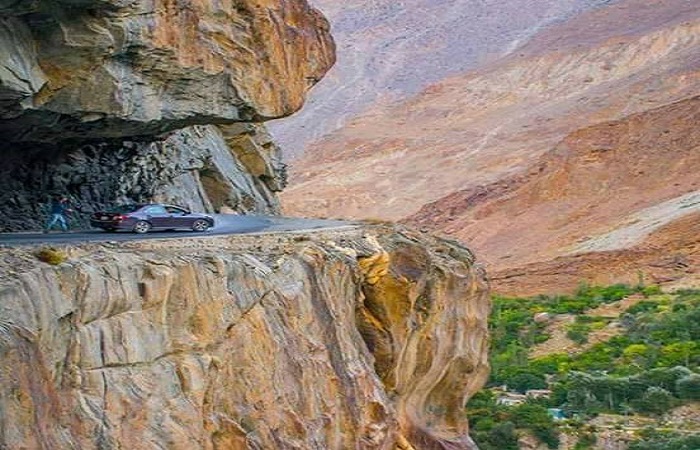 This is a single Road Between Skardu & Gilgit which is the only Earthly Linkage of Baltistan to the Rest of the World. The road is 167km long. Now a days it is a Valley of Death or Death Hell. Fatal Accidents and Vehicle falling down into River Indus is common due to small or narrow even broken surface of the Road.

The highway begins south of Gilgit near Juglot, on the N-35 National Highway (Karakoram Highway), and extends eastwards towards Skardu city. Initially the surface was gravel, but over the years some sections were paved. The road is winding and in some places only wide enough for one vehicle to pass. On other parts of the highway it is bordered by a cliff drop of hundreds of meters unprotected by guardrails. Total travel time between Gilgit and Skardu is around 8 hours in travelable condition. 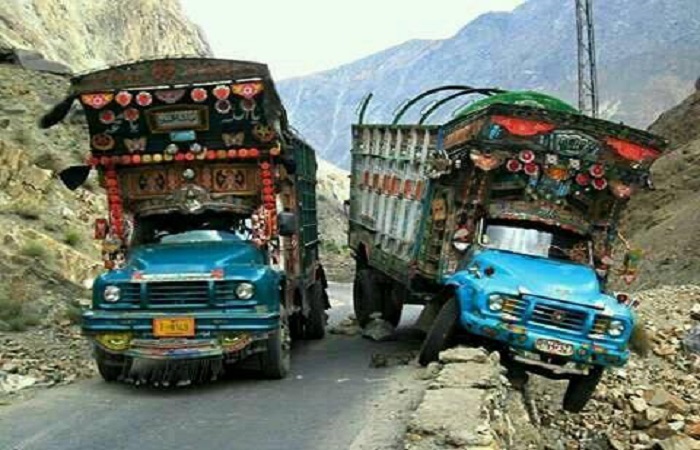 The highway can be blocked for weeks at a time depending on conditions (though two to five days is more common). The road ends in Skardu, the capital of Baltistan Region, at an elevation of 2,226 m (7,303 foot) above the sea level. It is one of the most dangerous roads in the world.

It was constructed by Pakistan Army Engineers with the Association of Chinese Engineers in 1982. 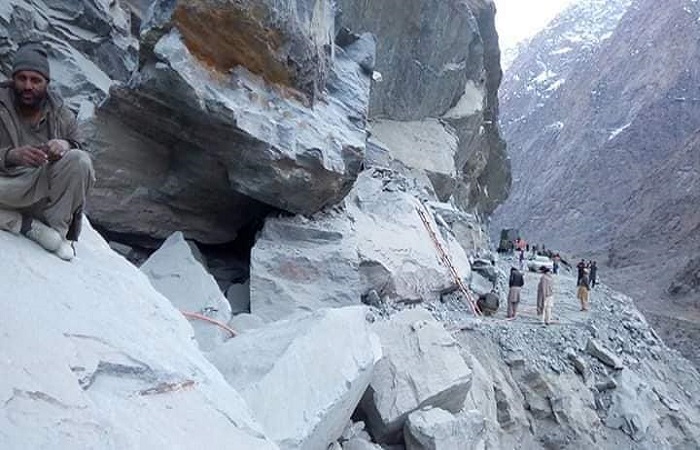 The Gilgit Skardu Road Project has been facing delays since 2008. Repairing and widening of the highway has begun now by Frontier Works Organization(FWO). After wide range of mass protest in every valleys of Baltistan and string Social Media Campaigns https://www.facebook.com/gilgitskarduroad the proposed Gilgit-Skardu Road (Expressway) plans to rebuild the entire highway at a cost of ₨.40 billion (US$240 million). As of September 2017, construction had started. 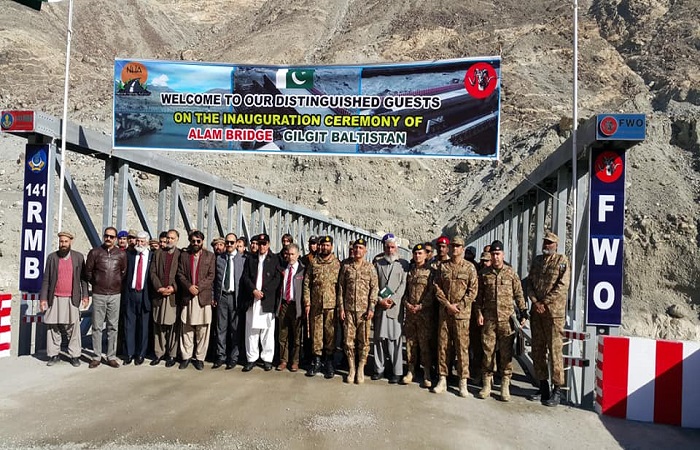 But the road is gradually becoming a death trap for the travelers. The continuous accidents during the year are alarming. These accidents are mainly owing to extremely long distance comprising 35 hours from Rawalpindi to Skardu with one driver and an assistant driver in buses and coasters.

Along with fatigue and dozing drivers also cause accidents, while deplorable conditions of buses and coasters which are in any circumstances not fit to run on this long and dangerous road also cause accidents. There should be a safety wall on both sides of the road, from falling down into River Indus and land-sliding from Karakoram mountains. 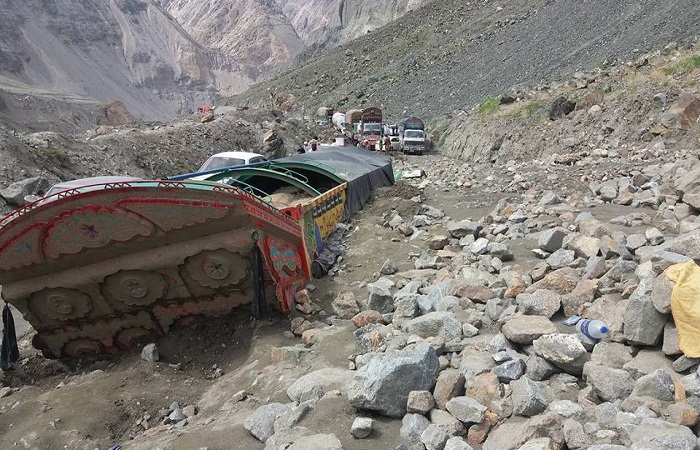 Gilgit-Skardu road is under construction (By FWO), local people blaming that "the width of the road has been decreased from 38 feet to 19 feet and the proposed eight tunnels have been abandoned which is risky. The safety measures during the construction underway are being highly compromised. It is creating an unsafe work zone for the workers, and a scarce optimism for the daily commuters to pass unscathed through the landslide-prone zones". As it is highly likely, due to the ongoing drilling and blasting of these rocks. The incidents are yelling that why there’s a need for tunnels at various points – for safety and to minimize the total amount of aggregate sufferings. 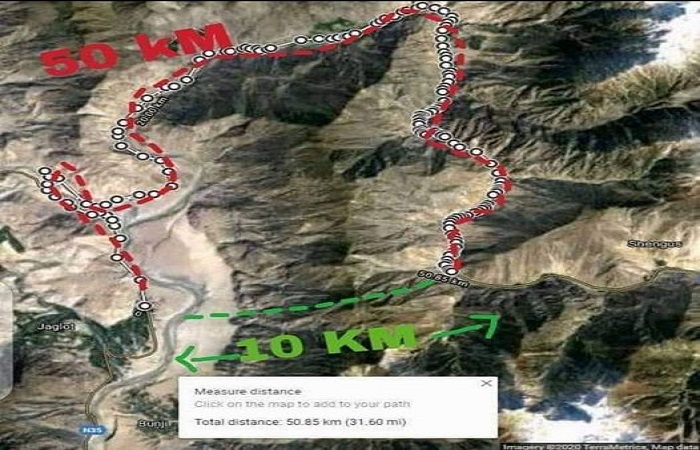 Sometimes, Blocked or swept away whole road into River Indus due to heavy landsliding that claims many lives.

Recent incident, yesterday a passenger bus was crushed by land-sliding on Gilgit Skardu Road at Tangoos area in Gilgit-Baltistan region leaving 16 people in the vehicle dead. 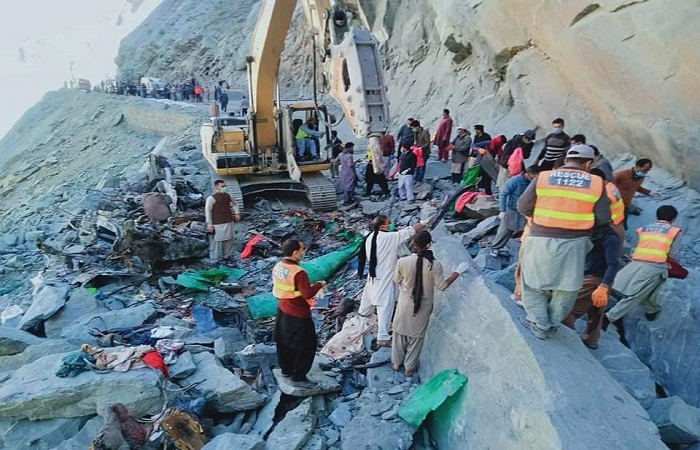 According to Gilgit Baltistan Government Spoke person Faizullah Faraq these land-siding are due to heavy rainfalls and work on progress, he also added that 80 percent of work has been completed. He informed that this year two more vehicles had fallen down before this incident, nearly 120 people death in last 10 months of 2020.