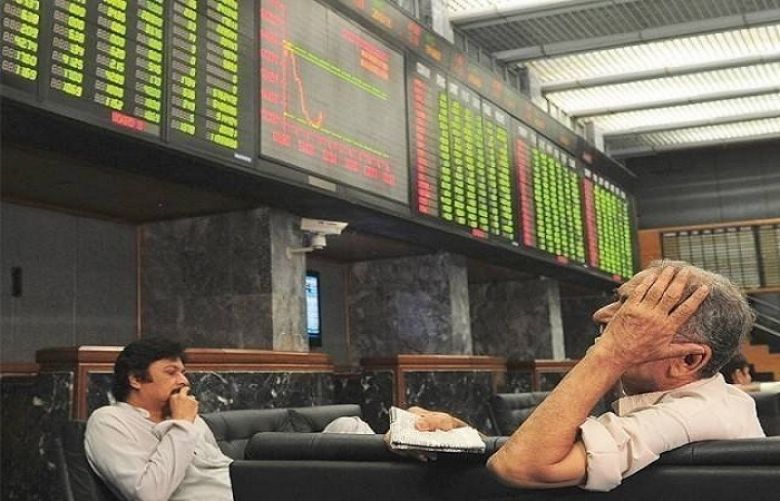 The Pakistan Stock Exchange’s benchmark KSE-100 index plunged 2,106 points after the starting bell on the first day of the trading week, forcing authorities to halt trading for 45 minutes.

The index, which had closed at 38,220 points on Friday, nosedived at the start of the trading, shedding 2,106 points (5.51%) before trading was suspended.

The crash was triggered amidst a global sell-off on coronavirus fears and spreading contagion from a creeping economic slowdown, as well as a crude oil price war between Saudi Arabia and Russia.

Trading floors were a sea of red across Asia, with Tokyo, Sydney and Manila plunging around 6%, while Hong Kong shed 3.5% by lunch.

Mumbai, Singapore, Seoul, Jakarta and Wellington were more than 3% down, Shanghai and Taipei shed at least 2% and Bangkok gave up 5%. The losses tracked sharp falls in Europe and Wall Street on Friday.

“PSX has triggered a market halt at 9:37am which will last for 45 minutes," the management wrote in a press release.

"The market halt is triggered as a standard protocol for risk management purposes,” a statement from the bourse said.

But some market analysts in Pakistan saw the plunge as a temporary setback.

Khurram Schehzad, CEO at Alpha Beta Core, noted that the market was under pressure after oil prices witnessed their biggest one-day drop.

"It is a big positive for Pakistan, as oil prices at these levels would result in $4-5 billion in savings," he said.

"The outlook for the market is positive given the expected decline in [Pakistan's] energy imports and trade deficit; inflation and interest rates; energy and leverage costs; potential to improve indirect taxes and reduced subsidy," he explained.

"Lower oil prices and the declining trend in inflation numbers hint at an early rate cut, which would be a big positive for the market," he said.

Equity markets around the world collapsed on Monday as the rapidly-spreading coronavirus fans fears over the global economy, while a crash in oil prices added to the panic, with energy firms taking a hammering.

As the deadly disease claims more lives around the world, dealers are fleeing out of riskier assets and into safe havens, sending gold and the yen surging and pushing US Treasury yields to new record lows.

Driving the declines was a ferocious sell-off in the oil markets, sparked by top exporter Saudi Arabia slashing prices — in some cases to unprecedented levels — after a bust-up with Russia over production.

Saudi Arabia launched an all-out oil war Sunday with the biggest cut in its prices in the past 20 years, Bloomberg News reported, after OPEC and its allies failed to clinch a deal to reduce output.

A meeting of main producers was expected to agree to deeper cuts to counter the impact of the coronavirus — but Moscow refused to tighten supply.

In response, Riyadh slashed its price for April delivery by $4-$6 a barrel to Asia and $7 to the United States.

Russia´s decision not to comply had already battered prices and there are warnings that prices could continue to drive lower if the two sides do not reach an agreement.

"It´s unbelievable, the market was overwhelmed by a wave of selling at the open," said Andy Lipow, at energy consultancy Lipow Oil Associates.

"OPEC+ has clearly surprised the market by engaging in a price war to gain market share."

"Oil prices... will likely be capped over the next few months as coronavirus stalls economic growth, and Saudi Arabia opens the pumps and offers huge discounts on its crude grades."

Marito Ueda, senior trader at FX Prime, told AFP: "Fears over the virus´s impact on the global economy and a plummet in US yields had investors seeking the safe-haven yen."

"It is essentially a flight from the dollar," he added.

The greenback fell below 103 yen, levels not seen since the third quarter of 2016.