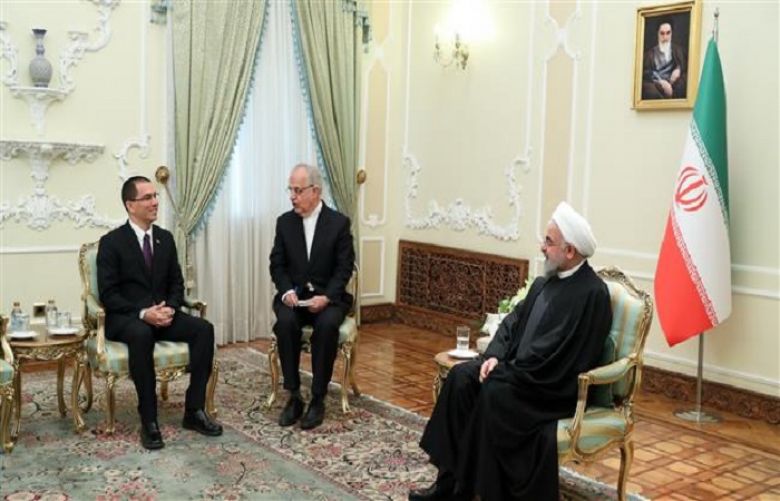 President Hassan Rouhani says US pressure tactics, including illegal sanctions, against Iran and Venezuela are tantamount to crimes against humanity, describing resistance as the key to foiling American conspiracies.

At a meeting with Venezuelan Foreign Minister Jorge Arreaza in Tehran on Tuesday, President Hassan Rouhani said Washington is perpetrating crimes against humanity by placing unlawful bans on Iran and targeting the Venezuelan nation and government with similar pressure policies.

“Undoubtedly, independent nations will stand up to these pressures and plots, and the nations that put up resistance will definitely emerge victorious from this battle and make the US regret (its actions),” the Iranian president said in a meeting with Venezuelan Foreign Minister Jorge Arreaza in Tehran on Tuesday.

“The current US administration is acting both against independent nations and governments and its own people and has turned into the enforcer of the Zionist regime’s (Israel) policies in the world,” he added.

Elsewhere in the meeting, the Iranian president pointed to cordial relations between Iran and Venezuela and said the Islamic Republic “is ready to expand its ties and cooperation with Venezuela as a friendly country.”

He noted that the two countries can improve cooperation in all sectors, including mining, energy, power plant construction, science and technology, expressing Tehran’s readiness to hold a joint commission on bilateral cooperation in the near future.

Iran will firmly stand by the Venezuelan government and nation in various international fields, particularly their resistance against the US pressure, Rouhani emphasized.

He thanked the Venezuelan government and nation for their expression of sympathy with Iran over Washington’s assassination in early January of senior Iranian commander Lieutenant General Qassem Soleimani in Iraq, saying the crime sparked outrage among Iranians and deeply saddened independent and freedom-seeking nations and governments of the world.

The Venezuelan foreign minister, for his part, offered condolences to Iran over Soleimani’s targeted killing and expressed confidence that independent nations will defend their interests against enemies’ plots and pressure.

Arreaza hailed Iran for throwing its weight behind Venezuela amid a US-backed political crisis gripping the Latin American state, calling for further expansion of Tehran-Caracas cooperation.

Heading a high-ranking delegation, the top Venezuelan diplomat arrived in Tehran on Sunday for a three-day visit.

In a meeting with his Venezuelan counterpart on Monday, Iran’s Foreign Minister Mohammad Javad Zarif said the late IRGC commander continues to inspire anti-US resistance even after his martyrdom.

Zarif said, “Lt. Gen. Qassem Soleimani was a prominent figure of the resistance front, which continues to inspire resistance even after his martyrdom.”