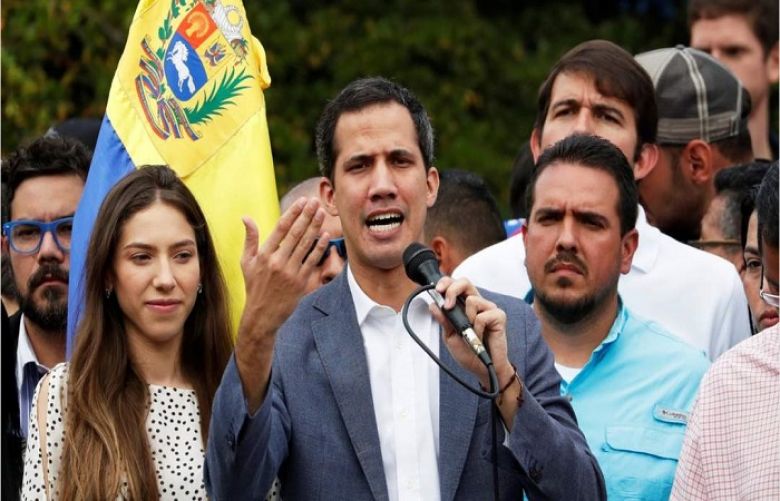 Venezuelan opposition leader Juan Guaido on Saturday called on citizens nationwide to travel to the capital Caracas for a protest against socialist President Nicolas Maduro, as the country’s worst blackout in decades dragged on for a third day.

Addressing supporters in southwestern Caracas, Guaido - the leader of the opposition-run congress who invoked the constitution to assume an interim presidency in January - said Maduro’s government “has no way to solve the electricity crisis that they themselves created.”

“All of Venezuela, to Caracas!” Guaido yelled while standing atop a bridge, without saying when the planned protest would be held. “The days ahead will be difficult, thanks to the regime.”

Activists had scuffled with police and troops ahead of the rally, meant to pressure Maduro amid the blackout, which the governing Socialist Party called an act of U.S.-sponsored sabotage but opposition critics derided as the result of two decades of mismanagement and corruption.

Dozens of demonstrators attempted to walk along an avenue in Caracas but were moved onto the sidewalk by police in riot gear, leading them to shout at the officers and push on their riot shields. One woman was sprayed with pepper spray, according to a local broadcaster.

The power flickered on and off in parts of Caracas on Saturday morning, including the presidential palace of Miraflores, according to Reuters witnesses. Six of the country’s 23 states still lacked power as of Saturday afternoon, Socialist Party Vice President Diosdado Cabello said on state television.

“We’re all upset that we’ve got no power, no phone service, no water and they want to block us,” said Rossmary Nascimiento, 45, a nutritionist at the Caracas rally. “I want a normal country.”

At a competing march organized by the Socialist Party to protest what it calls U.S. imperialism, Maduro blamed the outages on “electromagnetic and cyber attacks directed from abroad by the empire.”

“The right wing, together with the empire, has stabbed the electricity system, and we are trying to cure it soon,” he said.

Several hundred people gathered at the rally in central Caracas for a march to denounce the crippling U.S. oil sanctions aimed at cutting off the Maduro government’s funding sources.

“We’re here, we’re mobilized, because we’re not going to let the gringos take over,” said Elbadina Gomez, 76, who works for an activist group linked to the Socialist Party.

Julio Castro, a doctor and member of a non-governmental organization called Doctors For Health, tweeted that a total of 17 people had died during the blackout, including nine deaths in emergency rooms.

Reuters was unable to independently confirm the deaths or whether they could have resulted from the blackout. The Information Ministry did not respond to a request for comment.

Clinics in the sweltering western state of Zulia, which suffers chronic regional blackouts, had scaled back operations after nearly 72 hours without power.

“We’re not offering services and we don’t have any patients staying here because the generator is not working,” said Chiquinquira Caldera, head of administration at the San Lucas clinic in the city of Maracaibo, as she played a game of Chinese checkers with doctors who were waiting for power to return.

Venezuela, already suffering from hyperinflation and shortages of basic goods, has been mired in a major political crisis since Guaido assumed the interim presidency in January, calling Maduro a usurper following the 2018 election, which Maduro won but was widely considered fraudulent.

Maduro says Guaido is a puppet of Washington and dismisses his claim to the presidency as an effort by the administration of U.S. President Donald Trump to control Venezuela’s oil wealth.

Former mayor and exiled opposition activist Antonio Ledezma on Saturday called on Guaido to seek United Nations intervention in Venezuela by invoking a principle known as “responsibility to protect.”

The U.N. doctrine sometimes referred to as R2P was created to prevent mass killings such as those of Rwanda and Bosnia and places the onus on the international community to protect populations from crimes against humanity and ethnic cleansing.

“President @jguaido, (you should) formally request Humanitarian Intervention, applying the concept of R2P, to stop extermination, genocide and destruction of what’s left of our country,” Ledezma wrote via Twitter.

At the opposition rally, Guaido said he would not invoke an article of the Venezuelan constitution allowing the congress to authorize foreign military operations within Venezuela “until we have to.”

“Article 187 when the time comes,” Guaido said. “We need to be in the streets, mobilized. It depends on us, not on anybody else.”

Trump has said that a “military option” is on the table with regard to Venezuela, but Latin American neighbors have emphatically opposed a U.S. intervention as a way of addressing the situation.