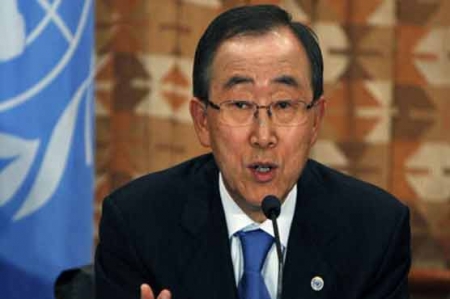 Ban said the international community should not look other way as violence spirals out of control.

Secretary-General Ban Ki-moon demanded international action to stop the war in Syria, telling a somber gathering of world leaders Tuesday that the 18-month conflict had become "a regional calamity with global ramifications."

In sharp contrast to the U.N. chief, President Barack Obama pledged U.S. support for Syrians trying to oust President Bashar Assad "a dictator who massacres his own people."

Opening the U.N. General Assembly s annual ministerial meeting, Ban said in his state of the world speech that he was sounding the alarm about widespread insecurity, inequality and intolerance in many countries.

Putting the spotlight on Syria, the U.N. chief said "the international community should not look the other way as violence spirals out of control." "We must stop the violence and flows of arms to both sides, and set in motion a Syrian-led transition as soon as possible," he said.

While Obama didn t call for an end to the violence, he made no mention of arming the opposition and stressed the importance of ensuring "that what began with citizens demanding their rights does not end in a cycle of sectarian violence."

"Together, we must stand with those Syrians who believe in a different vision, a Syria that is united and inclusive, where children don t need to fear their own government, and all Syrians have a say in how they are governed, Sunnis and Alawites, Kurds and Christians," said Obama, who arrived at the U.N. after Ban spoke.

"That is what America stands for; that is the outcome that we will work for with sanctions and consequences for those who persecute; and assistance and support for those who work for this common good," the U.S. president said.

Ban, declaring that the situation in Syria is getting worse every day, called the conflict a serious and growing threat to international peace and security that requires attention from the deeply divided U.N. Security Council. That appears highly unlikely, however, at least in the near future.

Russia and China have vetoed three Western-backed resolutions aimed at pressuring Syrian President Bashar Assad to end the violence and enter negotiations on a political transition, leaving the U.N. s most powerful body paralyzed in what some diplomats say is the worst crisis since the U.S.-Soviet standoff during the Cold War.

Brazil s President Dilma Rousseff, whose country by tradition is the first to speak, supported the secretary-general, saying: "There is no military solution to the Syrian crisis. Diplomacy and dialogue are not just our best option: they are the only option."

With the Security Council unable to act, the Emir of Qatar, Sheik Hamad bin Khalifa Al Thani, said Arab countries should intervene "out of their national, humanitarian, political and military duties and do what is necessary to stop the bloodshed ... in order to guarantee a peaceful transition of power in Syria."

He cited a similar precedent when Arab forces intervened in Lebanon in the mid-1970s to stop the civil war "in a step that proved to be effective and useful."

French President Francois Hollande said almost 30,000 people have died and asked: "How many more deaths will we wait for before we act? How can we let the paralysis of the United Nations to continue?" "I know one thing is certain, the Syrian regime will never again take its place in the council of nations. It has no future among us," he said. He called on the United Nations to protect "liberated zones" within Syria and to ensure humanitarian aid to refugees.

Ban also expressed profound concern at continuing violence in Afghanistan and Congo, increasing unrest across west Africa s Sahel region where al-Qaida has made inroads, and the "dangerous impasse" between Israelis and Palestinians that may close the door on the two-state solution.

The "shrill war talk" by Israel in recent weeks, in response to its belief that Iran is pursuing nuclear weapons, "has been alarming," Ban said, and Tehran s rhetoric threatening Israel s existence is unacceptable.

"Any such attacks would be devastating," he said, reminding the presidents, prime ministers, monarchs and diplomats from the 193 U.N. member states of the need for peaceful solutions and respect for international law.

"Leaders have a responsibility to use their voices to lower tensions instead of raising the temperature and volatility of the moment," he said.