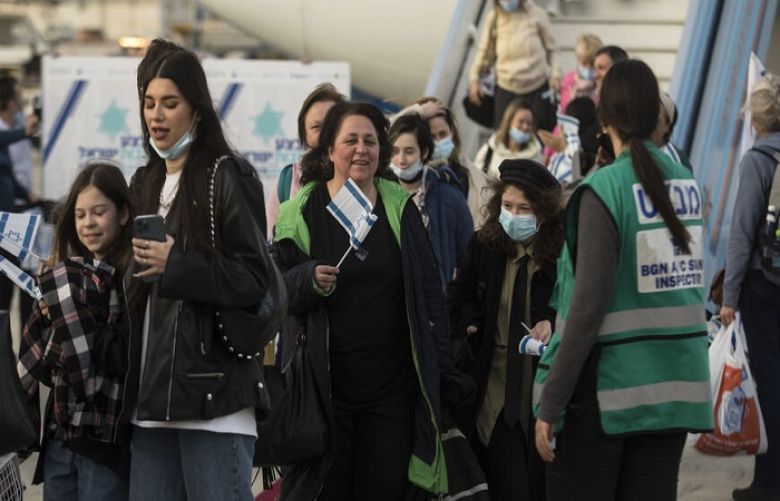 A, with at least one in eight leaving the country since its war with Ukraine began.The Jewish Agency helps Jews around the world move to Israel. It says an astonishing 20,500 of Russia's estimated total of 165,000 Jews have gone since March.

Thousands more have moved to other countries.

Undoubtedly the spectre of historical Jewish persecution has loomed large in the minds of many of those who are a part of this sudden mass migration and those still trying to get out of Russia.

In Moscow, there had been a huge effort to develop the Jewish community since the fall of Communism. Among those at the forefront was Pinchas Goldschmidt, the city's chief rabbi since 1993.

"We started from scratch with synagogues, schools, kindergartens, social services, teachers, rabbis and community members," he says of the vibrancy that was created.

But just two weeks into the war this year, Rabbi Goldschmidt and his family left Russia, first to Hungary and then to Israel.

He then stepped down from his position and spoke out against the war.

"I felt that I had to do something to show my total disassociation and disagreement with this invasion of Ukraine, but I would have endangered myself if I had done that staying in Moscow."

Some Russian Jews criticised him for leaving and speaking out, worried it would mean more scrutiny of the community, but Rabbi Goldschmidt said most were supportive.

"I received some messages saying 'How can you leave us alone?' but I would say the great majority were extremely supportive. It was not a minor conflict to decide whether to go, for me and my wife the community was our lives," he says.

Rabbi Goldschmidt says that it was through staying and speaking out that the community could have been left endangered.

But since then, huge numbers have followed his lead.

Pinchas Goldschmidt led the Moscow Choral Synagogue, one of the main synagogues in Russia and in the former Soviet Union
Many have taken up the opportunity of going to Israel, where the Law of Return gives anyone who can prove they have at least one Jewish grandparent the right to citizenship.

"I have been thinking quite a bit about why there is such a rush to go because we are not seeing a huge surge of anti-Semitism," says Anna Shternshis, Professor of Yiddish studies at Toronto University and specialist in Jewish history in Russia.

"But then putting my historian hat on, I see that every time something happens in Russia, some upheaval, some change, Jews are always in danger."

She describes how Russian historical events led to violence against Jews, such as the revolution, the economic crisis of the late 19th Century and World War Two.

"Not everyone acts on it, but every Jew in Russia today is thinking about this."

Professor Shternshis, was born and raised in Russia herself. She says she feels especially dismayed at the way in which Jews feel, once again in world history, that however much they have committed to building a life somewhere it can suddenly be taken away.

People in the Israeli city of Tel Aviv wave Ukrainian and Israeli flags during a protest against Russia's military invasion of Ukraine in March 2022One man we spoke to who is trying to leave felt he was in precisely that position. He wanted to be known by a false name, Alexander, because of fears of the consequences of speaking out given that he is still in Moscow.

"After 24 February, my family realised we were absolutely against this war but we did not know how we could protest. One of my children is the age of military service, so that is another reason we want to go," he says.

The distress in his voice at having to contemplate leaving his home and country is all too clear, and he talks of his fears of not being able to find work abroad and not having huge amounts of savings.

But as Professor Shternshis suggested, Alexander's anxiety about his family's future in Russia goes beyond just opposing the war.

"The authorities in Russia are unpredictable and they have a bad tendency; Jews become one of their propaganda targets, we are traditionally a good way to find internal enemies. My great-grandparents and grandparents suffered from those times," he says.

Alexander says he only knows two other Jewish families and that the community has not been a big part of his life.

But he fears that however integrated he is, this will not matter if the mood against Jews changes.

He has applied for Israeli citizenship and is due to be interviewed in the coming weeks.

One of the things that has alarmed Alexander is the Kremlin's stated intention to shut down the Russian arm of the Jewish Agency.

"All of a sudden we see that on the news, and we wonder what is next? We feel very unsafe and we think could we lose our jobs, or go to jail. Things have become very scary."