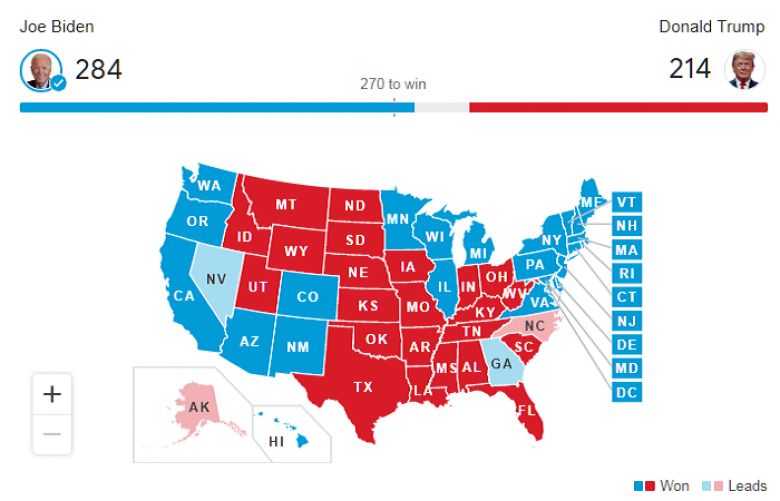 Joe Biden has been elected the 46th president of the United States, denying Donald Trump a second term after a deeply divisive presidency defined by a once-in-a-century pandemic, economic turmoil and social unrest.

Biden won the presidency by clinching Pennsylvania and its 20 electoral votes on Saturday morning, after days of counting votes and record turnout across the country. The win in Pennsylvania took Biden’s electoral college vote to 284, surpassing the 270 needed to win the White House.

The American people have replaced a real estate developer and reality TV star who had no political experience with a veteran of Washington who has spent more than 50 years in public life and twice ran unsuccessfully for president.

With turnout projected to reach its highest point in a century, a fearful and anxious nation elected a candidate who promised to govern not as a Democrat but as an “American president” and vowed to be a unifying force after four years of upheaval.

The outcome threatened to send convulsions across the country, as Trump’s campaign made baseless claims of voter fraud and vowed to challenge the results.

Biden, 77, is set to become America’s oldest president. His triumph came more than 48 hours after polls closed on election day, as officials in key states worked furiously to tally ballots amid an unprecedented surge in mail-in voting due to the coronavirus pandemic, which has killed more than 230,000 people and infected millions.

A father and husband who buried his first wife and his infant daughter in 1972 after they were killed in a car crash, and decades later buried his adult son after he died from brain cancer in 2015, Biden sought to empathize with Americans who lost loved ones to the coronavirus.

Biden in part premised his campaign on an ability to appeal to a broad coalition of Democrats, including the blue-collar, white working-class voters who abandoned the party for Trump in 2016. Haunted by the Democrats’ losses in Pennsylvania, Michigan and Wisconsin four years ago, Biden focused his attention on the region even as Democrats encouraged him to invest more heavily in once conservative states where rapidly changing demographics and an erosion of support in the American suburbs left Republicans vulnerable.

The election unfolded against a public health crisis that has left millions more out of work. While Biden made the pandemic a central theme of his campaign, framing the contest as a referendum on Trump’s management of the Covid crisis, Trump sought to downplay and dismiss it.

In the final days of the campaign, Trump held large rallies without regard to social distancing or mask-wearing, where he falsely claimed the United State was “rounding the corner” even as infections rose dramatically across the country.

Biden, by contrast, resisted public events for several months in an effort to demonstrate that he would be a serious and sober leader in the face of national crisis.

The cautious approach was not without risk, and Democrats fretted over Biden’s decision to so often cede the stage to his opponent, who relished the spotlight. In the final weeks, Biden darted across the swing states, holding drive-in rallies and socially distanced events.