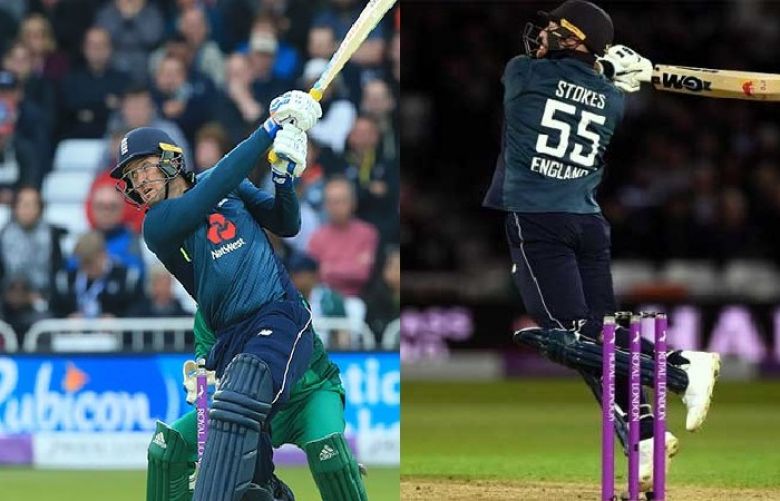 England defeated Pakistan by three wickets in the fourth one-day international at Trent Bridge on Friday, winning the five-match series 3-0.

Pakistan failed to capitalise on Babar Azam's century as they were held to a total of 340 for seven by World Cup hosts England.

With tournament favourites England naming their final 15-man World Cup squad on Tuesday, Surrey paceman Tom Curran did his selection prospects no harm with four wickets for 75 runs in a maximum 10 overs.

England, seeking a win that would seal the five-match series at 3-0 up with one to play, were looking at a stiff chase when Pakistan were 178 for one off 30 overs.

But the innings fell away following a century stand between Babar, who made 115, and Mohammad Hafeez (59).

It seemed the tourists were short of a truly competitive total because England have twice broken the record for the highest ODI total in three years at Trent Bridge. Last year's 481 for six against world champions Australia followed their 444 for three against Pakistan in 2016.

Pakistan's cause was not helped, when Imam-ul-Haq, fresh from his career-best 151 during England's six-wicket win in Tuesday's third ODI in Bristol, had to retire hurt on three after missing an intended pull of an 89 mph ball from fast bowler Mark Wood that hit him on the elbow.

But concerns over whether the 23-year-old left-handed opener, the nephew of Pakistan great and selection chief Inzamam-ul-Haq, would be fit for the World Cup were eased when he returned to resume his innings at the fall of the seventh wicket and he finished on six not out.

But Fakhar fell for 57 when, trying to drive Curran through the covers, he sliced the ball to Wood at third man.

Babar continued to attack, timing a drive off Adil Rashid superbly through the covers for four before Hafeez hoicked a six off the leg-spinner.

Hafeez was reprieved again on 45 when wicket-keeper Jos Buttler — who had sent Pakistan into bat in his role as captain after regular skipper Eoin Morgan's one-game ban following the team's slow over-rate in Bristol — missed a chance to stump him off spinner Moeen Ali.

Hafeez went to fifty at better than a run-a-ball before, on 59, he pulled Wood to mid-on.

Babar's 10th boundary, a leg-glance off Ben Stokes, took him to his ninth hundred in 63 ODIs, and first against England, in 104 balls.

He then sliced Surrey paceman Curran and Archer, running in from the cover boundary, held a well-judged catch to leave Pakistan 249 for three.

Wood showed his variety by deceiving Shoaib Malik (41) into hitting his wicket with a slower ball and finish with two for 71.