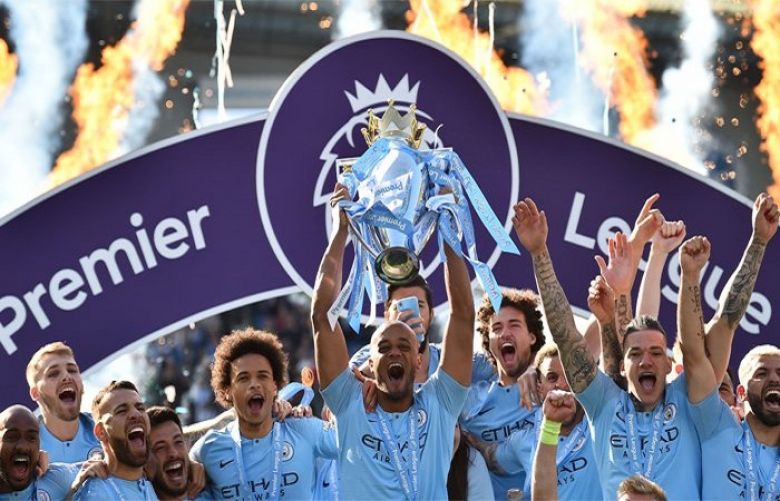 Manchester City rewrote the record books in a near flawless campaign to win the Premier League last season but by holding off Liverpool to retain the title, they have secured their status as true greats of the English game.

A year ago, it seemed City had set impossible standards to sustain in a 100-point season, winning the title with five games to go.

But by amassing another 98 points while being pushed all the way by Champions League finalists Liverpool, and staying on course for the first domestic treble in English football history, City have raised the bar again.

"When the people just suggest we can be one of the best, it's enough," said Guardiola who has now won eight league titles in 10 seasons in charge of Barcelona, Bayern Munich and City.

"The big competitors are like this. They are never satisfied. In tennis, basketball, golf, the big athletes they want more and more. That's why the second one, make back-to-back, show me this kind of thing. Show me it was not enough what they did with 100 points."

City have now won four titles in the past eight seasons. Complete the treble against Watford in the FA Cup final next weekend and it will be 10 major trophies since the club's Abu Dhabi owners started pumping huge amounts of money into the famously underachieving club in 2008.

Guardiola's side are the first team to retain the title since their bitter rivals Manchester United managed the feat in 2009.

United enjoyed a period of dominance in English football stretching over 20 years prior to Alex Ferguson's retirement in 2013, taking over the mantle from Liverpool, who enjoyed sustained success domestically and in Europe in the 1970s and 1980s.

Now City are desperate to deliver a dynasty of their own.

"If in 10, 15, 20 years the people talk about this team it is because we are a really good team," added Guardiola. "It is like a book or movies, if it sustains the passage of time and people watch the same movie or read the same book.

"In 15, 20, 25 years maybe people will say these guys did it with a lot of points, but they play really well. That is because we deserve to be alongside the biggest Man Utd, the biggest Liverpool, Chelsea or Arsenal."

Mentality and grit
Beyond the captivating football City expected when they made Guardiola their manager in 2016, they have shown the mentality and grit needed by all great sides.

Unlike their cruise to winning the league by a record 19 points last season, Guardiola's men needed every one of their 98 to see off Liverpool and prolong the Reds' long wait for a league title to at least 30 years, even though Jurgen Klopp's men smashed their club record points tally with 97.

Chelsea, Southampton and Huddersfield Town were hit for six, but as the season reached a nervy conclusion, City held their nerve to win three of their last five games 1-0.

The past week also put City's achievements into perspective, with the four sides immediately below them in the table qualifying for European finals.

Liverpool's 4-0 thrashing of the mighty Barcelona to reach the Champions League final hammered home how good City have had to be just to keep Klopp's men at bay.

"What they have done in two games against Barcelona in semi-finals of the Champions League, they have done during 38 fixtures every weekend," added Guardiola.

Liverpool beat Wolves 2-0 to end the season with nine straight wins as they ramped up the pressure.

But the City machine methodically picked off every one of the opponents that stood in their way from February through to May, completing a remarkable 14-game winning run to close out the title by winning 4-1 at Brighton.

For the first time, Guardiola has also shown his ability to chase, as well as lead from the front.

A shocking run of three defeats in four games in December meant City opened the year by welcoming Liverpool to the Etihad Stadium seven points behind.

The champions' 2-1 win was the only game Liverpool lost in the league all season and yet they still had to settle for second best.

"The most satisfaction I've had as a manager," said Guardiola.

"When you are seven points behind, you can say: 'It's done'. We did the opposite of that. We were like (chipping away at) a stone. After that, we arrive here."

City can now consider themselves among the greatest sides English football has ever seen.