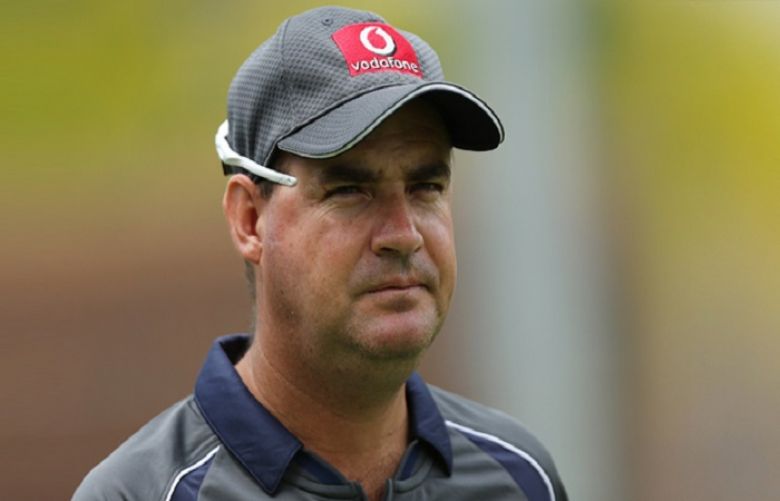 It seems that realism is slowly creeping into Pakistan cricket and the team management and selectors have come to peace with the fact that the national side’s batting line-up cannot be relied on — at least for the leading role — with the World Cup fast approaching.

That role will be taken up by the bowlers while the batsmen will ensure they play the supporting role perfectly if Pakistan are to win the most prestigious trophy in world cricket for the second time.

“I’m comfortable with the batting we have in place and it is going to do one hell of a job for us but if we have to be brutally honest, our bowlers are going to be the ones who [can] set up a win for Pakistan at the World Cup,” Pakistan head coach Mickey Arthur said.

“Our bowling is going to win us the World Cup while our batsmen are going to support the bowlers in this campaign,” added the South African.

Pakistan’s struggles with the bat have been consistent since more than a decade now and the problems seem to have become a stigma now which is hard to get rid of. With the World Cup set to be held in England this year, the conditions, once again pose a challenge to stroke-making.

Arthur, however, is approaching the situation realistically and taking away a significant amount of pressure from his batsmen, who are constantly targeted with criticism.

“We have got to be aggressive with the way we go, we have got to look to strike, look to take wickets and with that our batting will [gradually] grow,” he continued.

However, Arthur is still looking to strengthen the batting line-up. The Pakistan gaffer has recalled explosive-yet controversial batsman Umar Akmal to the national squad for the upcoming One-day International series against Australia.

Umar, who has not played for Pakistan since being sent back from England before the 2017 ICC Champions Trophy due to a failed fitness Test, makes his comeback on the basis of consistent performances for Quetta Gladiators in the ongoing Pakistan Super League (PSL).

The right-hander has accumulated 228 runs in nine outings for the Sarfraz Ahmed-led outfit and is averaging a healthy 38 with an impressive strike-rate of almost 137.

His flamboyant hitting in the UAE leg of the PSL must have been hard to ignore for Arthur, who said he talked to Umar about what it takes to consolidate a place in the Pakistan side.

“I had a meeting with Umar Akmal and discussed exactly where I thought he was. We are looking at the skillset that he brings to the Pakistan team. Obviously, he is a very intelligent player but he knows that he has to conform,” said Arthur.

“He knows that he has got to pass the fitness standards that are required of him. If he does all that he becomes available for selection which he has done.”

With six first team players rested for the Australia ODIs, the selection committee has replaced them with some players who have been consistent performers but were finding it difficult to make it to the national side.

Umar is one of those six players and is part of Arthur’s bench-strengthening project. The former Australia coach indicated Umar can fill in the crucial number six spot in the Pakistan batting line-up, which needs reinforcement.

“With so many of our [main] players not playing it’s a wonderful opportunity to have a look at our bench strength. We are looking for a guy who can come in at number six and take the game on and finish games,” said Arthur.

Preparing a strong bench also helps identify replacements for important veteran members of the national side. With batting all-rounders Mohammad Hafeez and Shoaib Malik reaching the end of their careers, Pakistan must also be looking at the post-World Cup shape of the squad.

“There’s Shan Masood, Abid Ali, Saad Ali, Umar Akmal, Hussain Talat, Asif Ali — those are the guys who we think can come into the mix and ultimately will look to fill those spots,” said Arthur about replacing Malik and Hafeez.

Arthur is in the metropolis with PSL side Karachi Kings who play the Gladiators on Sunday to ensure their qualification to the play-offs. Seven more matches, including the final will be played in the city.

The 50-year-old said it was a huge advantage for him to be the Pakistan and Kings head coach at the same time and it helps him identify the ‘ones for the future’.

“It helps me because I’ve a look at all the young talent. That helps me to pick the next best young talent in Pakistan cricket,” said Arthur.

Arthur said he has already spotted and noted down the names of some players who he thinks can achieve the Pakistan jersey in future.

“I have picked seven young players from the PSL who I think can go on and do good things for Pakistan. I can know who they are, we can monitor them at the National Cricket Academy, we can put them in coaching programmes, they can come to our skills camps and that’s the big benefit about it.”

The Pakistan head coach gave a special mention to 18-year-old pacer Mohammad Hasnain who clocked 150kph during the UAE-leg of the PSL.

“Mohammad Hasnain, I’ve watched him up-close, have seen him train and work,” said Arthur of the Quetta Gladiators’ youngster.