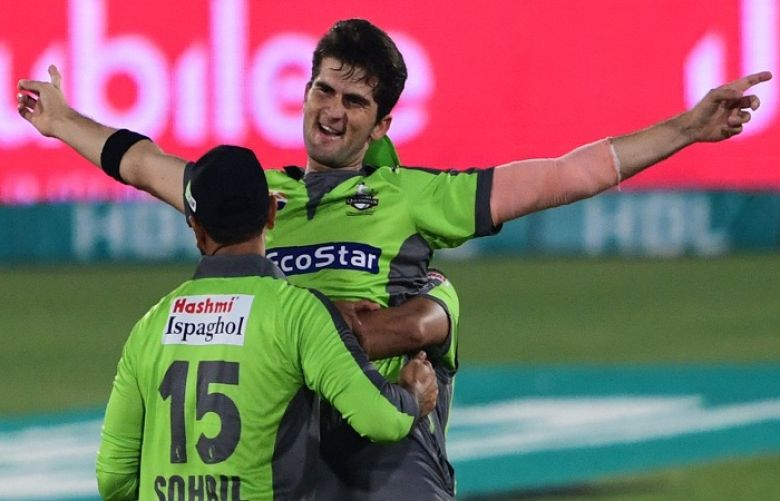 The do-or-die match between the two sides was a staggering see-saw battle as both were unwilling to give up till the very end, as fans witnessed one of the most scintillating contests in the history of PSL.

While chasing the target, Pual Sterling, who returned to the franchise after a national duty, smacked Shaheen Shah Afridi for 14 runs in the first over. But Shaheen roared back brilliantly in the third over as he dismissed him as well as Will Jacks with Haris Rauf taking catches on both occasions.

Shadab Khan was also dismissed for 14, and Liam Dawson was also sent packing for 12 runs. At this point, Lahore was in the driver's seat having put United under the pump.

But after that, Azam Khan and Alex Hales forged a brilliant 79-run partnership which brought United back into the game. They both played sensibly as they were hitting boundaries as well as rotating the strike and it looked like the game was in United's pocket.

But an unbelievable fielding effort brought Lahore back into the game when Hales cut the ball and tried to take a single and Rauf's brilliant direct hit sent Azam back for 40 runs off 28 balls with two sixes and three fours.

Hales was also removed just after Azam when Kamran Ghulam took a great jumping catch of Rauf's bowling who was right on the money in today's game.

The topsy-turvy match also took another turn when Asif Ali got the reprieve as Shaheen dismissed him but overstepped. Asif then hit a six to bring the game closer and was dismissed by Rauf for 25 runs when United were eight runs behind.

In the last over, eight runs were required with Wasim on strike, and David Wiese held his nerves. Wasim was run out and Waqas was caught at the boundary as Wiese picked the last wicket to take Lahore to the final as the heart-wrenching clash came to an end.

In terms of bowling for Lahore, Rauf was brilliant with figures of 2-31 in four overs, Shaheen took 2-32 in four overs, while Zaman also took two and Wiese one.

Earlier, David Wiese's three sixes and one four in the last over have helped Lahore Qalandars post a fighting 168-run total in the do-or-die eliminator two.

Lahore after deciding to bat first, got off to the bad start as the in-form Fakhar Zaman was removed by Liam Dawson who bowled a brilliant new-ball spell.

After that, Abdullah with Kamran Ghulam forged a crucial 73-run stand for the third wicket to steer the inning against a good bowling attack of United.

Ghulam rotated the strike to keep the scoreboard ticking, while Abdullah took the attack against the opponent bowlers as he notched three sixes and four fours in a 28 ball knock.

After Abdullah's dismissal by Waqas Masqsood, United got the dominant hand over Lahore as they made it difficult for their battles to carve out quick runs.

They also displayed brilliant fielding as Harry Brook was run-out by a brilliant throw from Muhammad Wasim, and Samit Patel was caught by Muhammad Huraira who took a brilliant running catch.

In terms of bowling, Dawson was brilliant with figures of 2-24 in four overs, Wasim also picked two, while Shadab and Waqas also picked one.