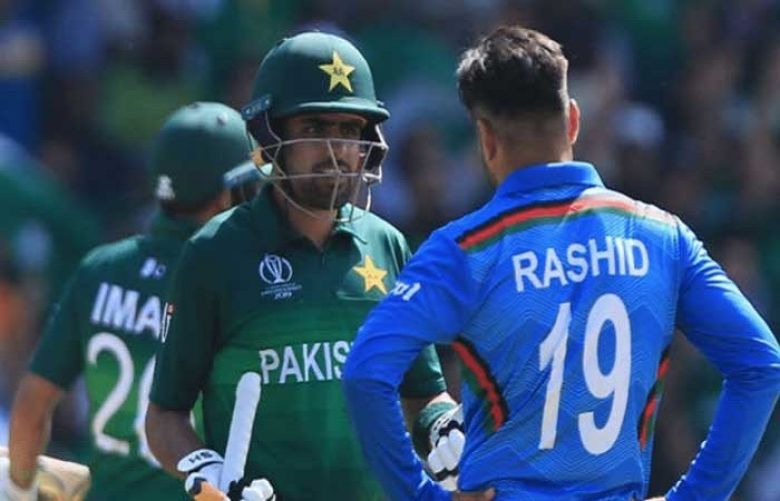 Asif Ali once again rose to the occasion, walking out in the middle of a high-pressure situation and hitting four sixes to ensure Pakistan won their T20I clash against Afghanistan Friday.

Pakistan were struggling to find their feet after wicketkeeper batsman and opener Mohammad Rizwan, Mohammad Hafeez and Fakhar Zaman were dismissed by Afghanistan spinners Rashid Khan, Mujeeb and Nabi.

Pakistan needed 148 runs to win their third T20 World Cup clash against Afghanistan and qualify for the semi-finals.

Skipper Babar Azam and Fakhar Zaman had formed a solid partnership before Nabi dismissed the left-handed batsman, trapping him lbw.

Babar Azam scored another half-century to ease some pressure off Afghanistan. However, the Pakistani skipper was once dropped off a Rashid Khan delivery.

However, Rashid Khan deceived him for the second time in the same over, this time bowling him out.

He was not Rashid Khan's first wicket, though.

Mohammad Hafeez never looked settled on the crease and an economical over by Rashid Khan put him further under pressure. The Afghan spinner dismissed Hafeez as he attempted to hit him out of the park, caught instead by Gulbadin.

Earlier after struggling against Pakistan's bowling attack, Afghanistan managed to recover courtesy of an impressive partnership between Gulbadin and Nabi, who steered their country to 147 runs at the end of 20 overs.

Earlier, With three wickets down, Afghanistan were already in trouble when Hassan Ali took a wicket from his very first ball, dismissing Rahmanullah Gurbaz, caught by skipper Babar Azam.

Afghanistan kept on ticking the scoreboard with sixes and fours, however, the Pakistani bowlers also did not refrain from tacking wickets.

Karim Janat tried to hit Imad Wasim for a six but the ball ended up in Fakhar Zaman's hands, with Afghanistan losing their fifth wicket.

Earlier, Afghanistan won the toss and elected to bat first against Pakistan.

Skipper Babar Azam and the rest of the Pakistan squad have played good cricket till now in the ICC T20 World Cup. However, the Men in Green will have their hands full today (Friday) when they try to tackle Afghanistan's spin bowlers.

Pakistan head into the match confident after securing wins against heavyweights India and New Zealand from their first two games.

With two early wins, Pakistan's chances of reaching the semi-finals are bright. However, given the conditions in the United Arab Emirates (UAE) and Afghanistan's performances so far, Afghanistan is also considered a dangerous side.

Pakistan thrashed India well in the first match, beating the team by 10 wickets. They also easily defeated the Kiwis in their second match.

Afghanistan have emerged as a dangerous side in the tournament as in their warm-up match, they easily defeated defending champions West Indies. They also beat Scotland by a huge margin of 130 runs in the Group Two match.

In bowling, Rashid Khan and Mujeeb-ur-Rehman will give a tough time to the batsmen of the opposing team, while Hazratullah Zazai, Mohammad Shehzad and Asghar Afghan are in good form for batting performances.