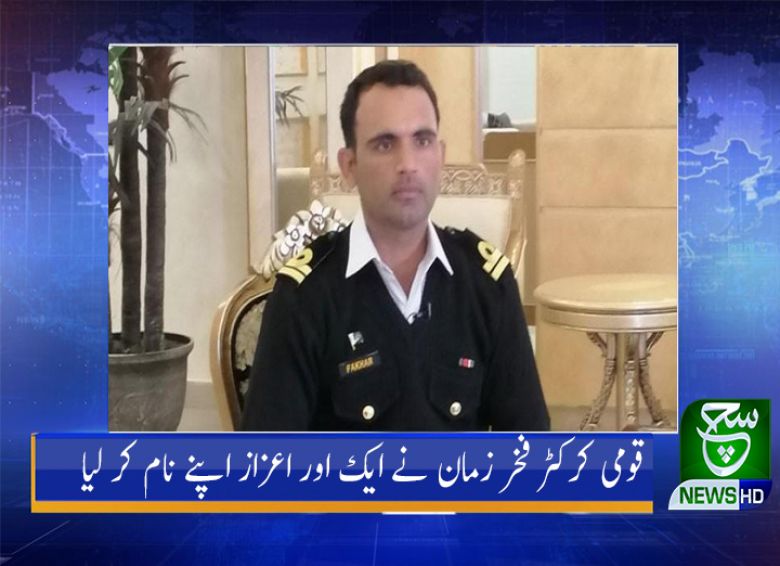 The Pakistan Navy conferred the honourary rank of lieutenant to renowned cricketer Fakhar Zaman in a bid to acknowledge his achievements in the sport as well as his association with the Navy.

According to a statement issued by the Director-General Public Relations of the Pakistan Navy, the Chief of the Naval Staff Admiral Muhammad Amjad Khan Niazi conferred the honorary lieutenant title upon Zaman during a special epaulette award ceremony held at the Naval Headquarters in Islamabad.

Fakhar Zaman is a former Pakistan Navy serviceman. He joined the navy in 2007 as a sailor with the operations branch. During the early years of his service, his excellent cricketing skills were spotted after which he represented the Pakistan Navy in several cricket tournaments.

According to the statement, Fakhar's performance in the game remained exceptional throughout his time in the team and he earned numerous laurels for the Pakistan Navy.

In 2012, he made his international debut in cricket while he was still serving in Pakistan Navy. He participated in International Defence Cricket Challenge Cup 2012 held in Australia where he won the "Best Player of the Tournament" accolade.

Later, he received the Sanad-e-Tahseen award by Chairman of the Joint Chiefs of Staff Committee (CJCSC) for his excellent cricketing skills.

Per the statement, the Pakistan Navy has graciously provided Fakhar with the opportunity to continue his career in cricket and join the Pakistan National Cricket squad.

During the course of time, his major achievements in the field of cricket include a match-winning century against India in the final of ICC Champions Trophy in 2017. He was also declared the “Man of the Match”.

Aside from that, he scored 1000 fastest runs in just 18 One Day Internationals (ODIs) in the year 2018. He became the first Pakistani to score a double century in an ODI and holds the record for establishing an opening partnership of 304 runs in 2018.

Fakhar Zaman also made a world record by scoring 512 runs in five consecutive ODI series. In the national T20 Tournament this year, he won the title of "Best Player and Batsman."

While addressing the ceremony, the Chief of the Naval Staff Admiral Muhammad Amjad Khan Niazi congratulated Fakhar Zaman for his remarkable achievements for Pakistan in the field of cricket.

He underscored that the Pakistan Navy has been supporting various sports, including squash, sailing, hockey, and football, among others, and has produced a number of professional players who represented Pakistan and earned laurels for the country.

He highlighted that the Pakistan Navy will continue its patronage for the sports culture at both national and international levels.

The epaulette award ceremony was attended by civilians, military personnel, and dignitaries from the Pakistan Cricket Board.