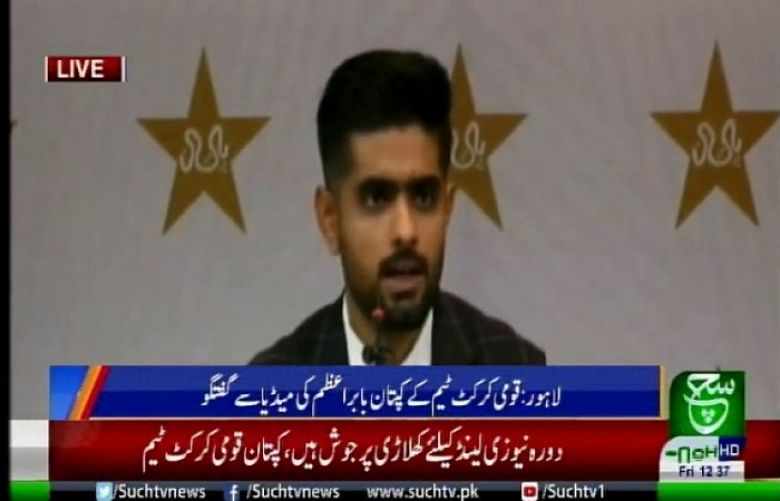 Pakistan's captain Babar Azam on Friday said that the team is very excited to go on its New Zealand tour, adding that it will perform to the best of its abilities.

Addressing a press conference in Lahore, Azam said that players are well-prepared to take on the challenge.

"We are playing back to back and are confident about our performance," Babar Azam said. "Our record in New Zealand has been good. We will play good cricket."

Pakistan announced its tour to New Zealand in September this year. The two teams will play three T20Is and two Tests from December 18 to January 7. The team will depart in the last week of November after which they will enter a two-week quarantine period in Lincoln following New Zealand government's COVID-19 protocols.

The skipper maintained that the team is taking the tour as a challenge as well as a responsibility, but it is not under any kind of pressure.

"We will enjoy the tour and make efforts to present a good game. I have tried to learn a lot from my experience."

Thanking his teammates Sarfaraz Ahmed and Azhar Ali, Babar Azam said that he has not only learned from them but will also consult them whenever needed.

"I am the one responsible for making decisions but I will consult them too," Babar Azam maintained. "I try to take responsibility and play with the same responsibility."

Answering a question, he said that there is no concept of grouping among the players, stressing that the team sees itself as a single unit.

"All the players are very good and try to play well. We always face challenges and playing abroad is a difficult task, but we have been playing well when abroad. For example, we showed a good performance in England," Azam said.

The captain also praised the team's young fast bowlers, adding that they must be supported by everyone.

Azam also expressed his gratitude to the former head coach of the Pakistan Cricket Team Mickey Arthur, saying that his guidance has given him the confidence to perform better.

"I am aiming to score a century in the upcoming New Zealand, Australia, and England tours," he said.

Babar Azam reiterated that the Pakistan Cricket Board has given him the freedom and confidence to continue a long-term captaincy, therefore, he is not under any kind of performance pressure.

Even though Babar demonstrated confidence in his team, he did not rule out the unpredictable nature of cricket.

"Players need confidence and hard work on every tour. However, the result is not in our hands," he concluded.