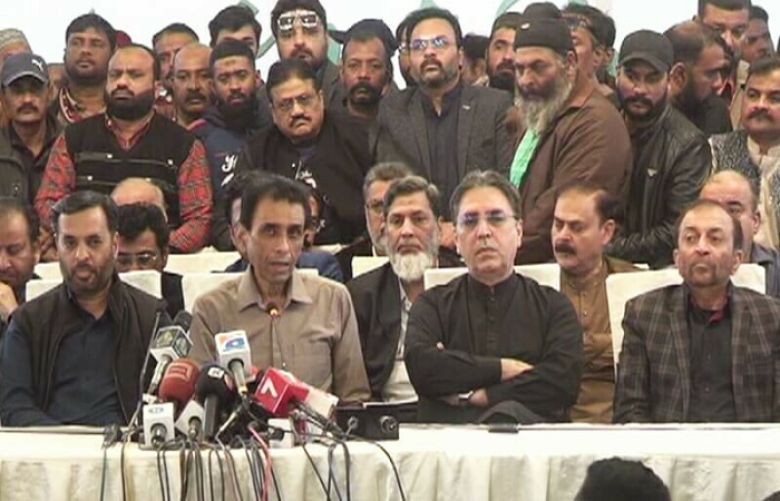 The Muttahida Qaumi Movement-Pakistan (MQM-P) has said that the Karachi mayor is not being chosen from the people's mandate but by political bargaining.

Speaking at a press conference alongside other party leaders in Hyderabad on Sunday, Convener Dr Khalid Maqbool Siddiqui said that the way recent local government (LG) elections were conducted, "no example could be found of such polls in history", adding that the MQM-P had defeated the conspiracy of electoral fraud by withdrawing from the LG elections.

"The feudal system is threatened by our struggle and we refuse to recognise it. The MQM-P has decided to struggle for people's rights and for that it has chosen the path of demonstrations."

Dr Siddiqui further said that through the pre-poll rigging, attempts were made to prove the port city is someone else's stronghold and "we had also filed petitions regarding the electoral tampering in Sukkur and Mirpur".

He went on to say that in the urban dwellings, "the conspiracy is hatched to show the number of people less by census and they tried to present the transformed demography of Karachi, Hyderabad and Sukkur in the census".

He further told journalists that "urbanisation occurred at a fast pace in Karachi and Hyderabad, yet in both the cities it was not manifested as it should be", adding, "The census was proved wrong many times and those who carried that out were punished but the census was not corrected."

He said the rigging had been underway for the last 50 years in the voter lists and the delimitations, reiterating that "if our case was strong, the Supreme Court could have taken a suo motu notice".

Mustafa Kamal, whose Pak Sarzameen Party (PSP) recently merged with the MQM-P, while speaking on the occasion said: "The results of LG polls have not yet been finalised," adding, "We created Pakistan, and today, we are also struggling to save it."

The former Karachi mayor added, "Today, peace is maintained in the city just because of us. Not a single area can be called a no-go area. There is no one who can stop the Sindh government from doing what it is currently doing."

He went on to say that people were not properly counted in Karachi and Hyderabad. "30 million people live in this city but only 15 million dwellers were shown."

Kamal further said rigging was carried out in all three segments of the local polls. "We are not holding the federal and provincial governments but we could only be given the authority of cleaning and administration of the metropolis. Now, you [govt] do not consider us much able to run such administrative areas."

MQM-P deputy convener Wasim Akhtar also told the media that, "regarding our boycott, it is being said that our decision was wrong". He added that people had rejected the election and it could be seen as a low turnout. "We tried our best that we can raise our voices regarding the issue of delimitation."

He added that according to the Constitution, the Election Commission of Pakistan "is responsible to conduct free and fair elections".

"We are not ending our struggle at this point and we will raise our voice at all platforms that this election should be declared null and void," he further said.