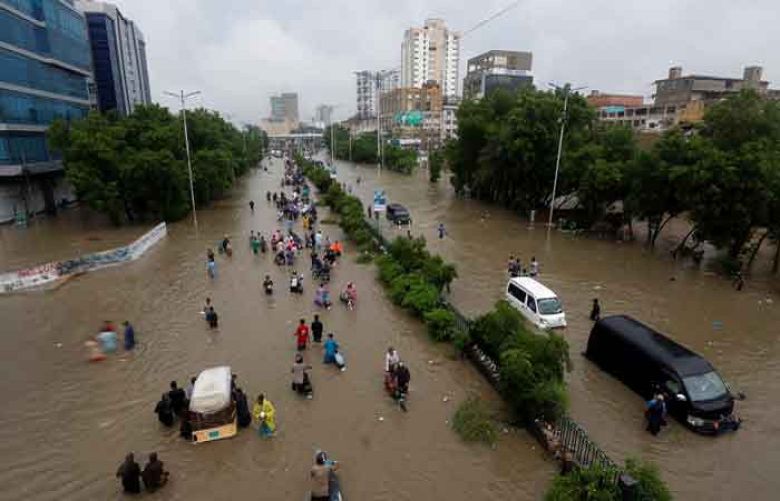 A powerful monsoon system formed in the Arabian Sea caused torrential downpours in various parts of Karachi Sunday evening, but it claimed the lives of two youngsters.

According to the police, a woman and her three-month-old daughter fell into a flooded nullah in the Buffer Zone area while they were passing through on a motorbike. The woman was rescued in an unconscious state, while a search for her daughter was initiated.

According to officials, lightening struck 16-year-old Raju, son of Hashim Shaikh, in Malir's Jam Mahar Ali Goth, and he was immediately taken to a nearby private hospital, where doctors pronounced him dead, after which his body was taken to the Jinnah Postgraduate Medical Centre (JPMC).

Farhan, son of Khalid, was electrocuted at his shop in Orangi Town, according to the Mominabad police, and his body was taken to the JPMC.

The much-feared monsoon rains wreaked havoc on the city, inundating all major thoroughfares and causing severe traffic jams for hours.

Rainwater also flooded Nipa, Abul Hassan Ispahani Road, and parts of Gulshan-e-Iqbal. The situation in District Korangi deteriorated after most of the district's localities were flooded. Korangi No 1 and its surrounding areas were inundated, and the damaged roads brought traffic to a halt. Imran Athar, a citizen, was driving from Korangi to Shah Faisal when he became stuck in the rain for several hours.

According to the traffic police, the Submarine Underpass was closed for traffic due to the presence of rainwater. Meanwhile, rainwater impeded traffic movement on Korangi Road.

Karachi Administrator Murtaza Wahab told the media that rainwater did not accumulate in large quantities at any point in the city, while the traffic continued to move. He stated that as a precautionary measure, heavy machinery had been deployed along various city thoroughfares, particularly in low-lying areas.

Wahab said the local government’s workforce was on standby and monitoring the situation. He pointed out that the storm water drains of the city were working normally, saying that Sharea Faisal and all the other thoroughfares were clear.

According to the Pakistan Metrological Department’s (PMD) data, the highest amount of rain in Karachi was recorded at 59mm in Gulshan-e-Hadeed, followed by 34mm in Quaidabad, 32.8mm in Orangi Town, 31mm each at the Jinnah Terminal and in Saadi Town, 29.5mm in the old airport area, and 23.5mm in Korangi.

Moreover, 23mm of rain was recorded on Shahra-e-Faisal, 20mm in Nazimabad, 18mm each at the PAF Base Masroor and in North Karachi, 16mm in Keamari, 15mm in DHA, 12.5mm at the Met Office on University Road, 10mm in Gadap Town, and less than 3mm in Saddar and in Surjani Town.

Residents of the Gulistan-e-Jauhar, Scheme 33, Malir, Quaidabad, Bin Qasim, Korangi, Landhi, Clifton, Defence, II Chundrigar Road, MT Khan Road, Keamari, and Gulshan-e-Iqbal areas, among others, complained of power breakdowns. In some areas, electricity was restored after a while, but some were still without power until the filing of this report.

According to K-Electric, power supply to most areas of the city continued during the current spell of rain. The KE spokesman said power was being supplied to the city through 1,750 of the 1,900 feeders.

He said that around 150 feeders had been shut down for safety, mostly in the areas with a high concentration of kundas (illegal connections) and electricity thefts. He requested the citizens to maintain a safe distance from all the electrical installations, and advised them to register their urgent complaints through KE’s call centre (118), social media channels, KE Live app, and SMS service (8119).

Under the influence of a depression [intense low-pressure area] over the Northeast Arabian Sea and the adjoining Gulf of Kutch, different areas of Karachi received moderate to heavy showers, Sindh’s chief meteorological officer, Dr Sardar Sarfaraz, told The News. "More showers, including some heavy falls, are also expected on Monday [today]."

Dr Sarfaraz said that the low-pressure area that converted into a depression moved in the west-north-west direction with a speed of 10 kilometres per hour during the past 12 hours, and now lay at a distance of about 160km south of Karachi and 140km from Thatta.

"The maximum sustained surface wind is 50-55 km/hour around the system centre. The system is likely to move westward [towards the Oman coast]. Under the influence of this weather system, rain with wind or thunderstorms with a few heavy to very heavy falls are likely in Karachi."

The officer said wind storms might cause damage to loose and vulnerable structures, adding that the PMD’s Tropical Cyclone Warning Centre in Karachi was closely monitoring the system, so updates would be issued accordingly. He requested all the relevant authorities to remain vigilant.