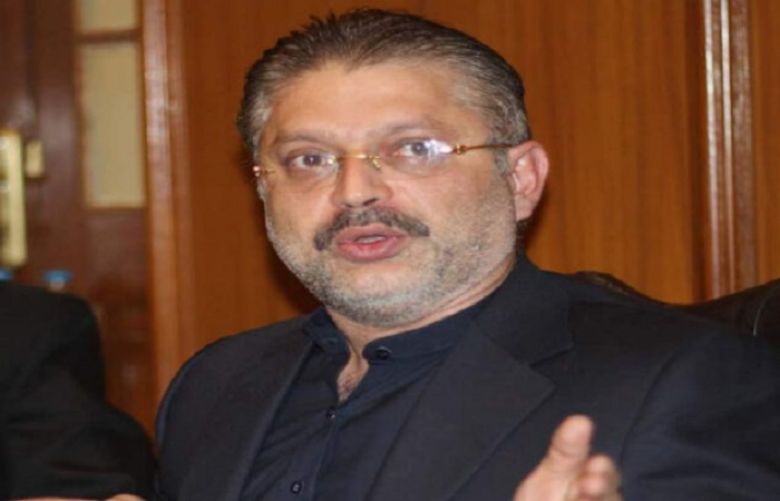 Sindh Information Minister Sharjeel Inam Memon Friday said that 28 people were taken into custody for forcing people to shut restaurants across the province.

Unknown men set a car on fire at the city’s Al-Asif Square today during protests over the killing of a youth during a quarrel at a restaurant in Hyderabad.

Addressing a press conference alongside provincial ministers, Sharjeel added that some miscreants want anarchy in the county. “The government has arrested some people involved in the riots,” he said, adding that law enforcement agencies are doing their job while political dialogues are also being held to resolve the matter.

The provincial minister further added that the Federal Investigation Agency (FIA) will initiate an investigation against all those who will pass negative comments on social media to ignite hatred.

“Everyone is requested to remain peaceful and not take the law into their own hands,” Sheikh said, adding Sindh is the land of Sufis who always teach love.

In response to the call, ANP President Shahi Syed appealed to the people to remain peaceful.

“We are in contact with the government and no injustice will be meted out to anyone.”

“All illegal immigrants from Afghanistan, Burma, Afghanistan, Bangladesh, and Iran will be sent back,” Qaumi Awami Tehreek chief Ayaz Latif Palijo said, adding that this is what entire Pakistan wants.

He further added that even the court has said that Pakistan’s economy cannot bear the burden of the immigrants residing illegally in the country.

“We request people belonging to Sindhi and Pashtun ethnicity to remain calm,” he said, announcing that the leadership will deliver a mutually-consensual message in a day or two.

In a statement, Chief Minister Sindh Murad Ali Shah said the government has ordered authorities to take action against the suspects involved in damaging properties during the Karachi riots.

“The district administration and police should ensure that activities in the city continue as per routine. Mischief and negligence on the part of the administration will not be tolerated,” he said.

In response to the reports of streets being closed amid the protests, the chief minister said that he has directed the administration to ensure that nothing of the sort happens.

“The government has spoken to all relevant stakeholders and all of them have distanced themselves from these acts,” the chief minister said, referring to political forces.

According to DSP Sohrab Goth Sohail Faiz, armed groups set fire to a vehicle after which the police arrested 15 people to control the riots.

The police officer said that 150 people were arrested during yesterday's riots.

It may be recalled that restaurants were closed in different parts of Hyderabad on July 12 after the murder of a young man named Bilal Kaka during a quarrel at a restaurant in Hyderabad.

The situation worsened on Thursday as ethnic tension flared up in different parts of Sindh, forcing political leaders to urge their followers to show restraint and stay calm.

Urging citizens to not pay heed to rumours, Inspector-General Sindh Ghulam Nabi Memon said that the law and order situation is under control in the province, adding it was the priority of the police to ensure peace.

Over 100 people are under custody in relation to the Sohrab Goth incident and cases have been registered against the suspects, Nabi said.

The top cop added that the situation in the province had returned to normalcy.

Nabi said that nine people have been nominated in the Hyderabad incident and two of them have been arrested. Meanwhile, raids are being conducted to nab the other accused as well, the police official added.