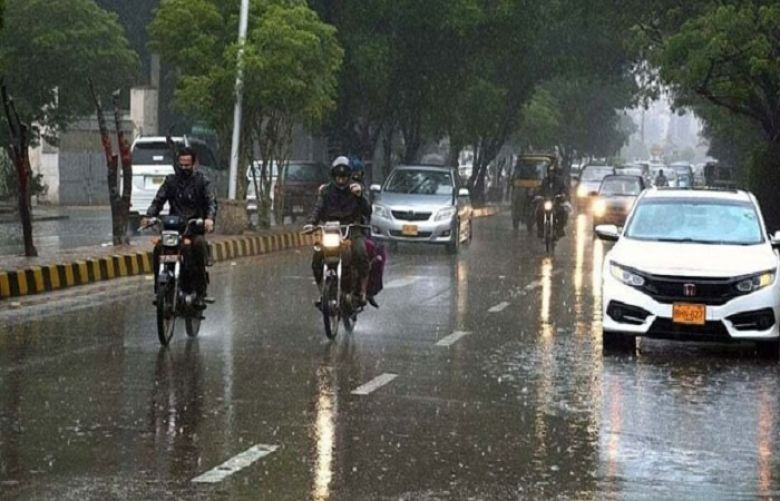 Moderate to heavy rain coupled with strong winds lashed the central and northern areas of Karachi on Monday afternoon under the season's first monsoon spell, bringing citizens some respite from the sweltering heat.

He went on to say that light rain was predominantly reported across the city. However, heavy showers were recorded in the outskirts of the metropolis, he added.

During the next two days, the weather will remain cloudy while intermittent rainfall is expected, he said.

Karachi Administrator Murtaza Wahab said the "entire administration" was on ground to deal with any situation.

"Traffic congestion will be a major challenge since people leave their offices at [the] same time as soon as it starts raining. Would request people to avoid unnecessary movement or schedule their movement to avoid traffic," he added.

Separately, Malir SSP Syed Irfan Ali Bahadur said that all police officials had been alerted and authorities were monitoring the rain-affected areas closely.

Patrolling teams have been formed to prevent any untoward incident, he said, urging people not to stand near trees, electricity poles, signboards and billboards.

In an advisory last week, the PMD had predicted widespread rain with thunder and windstorms in Karachi and other areas of Sindh from July 2 to July 5 under the influence of monsoon currents.

It had warned that the rains could cause urban flooding in Karachi, Hyderabad, Thatta, Badin, Mirpurkhas, Umerkot and Dadu districts from July 3 to July 5.

However, the PMD on Sunday stated that the weather system had weakened and might result in moderate downpour only.

On June 23, Karachi had witnessed an unexpected pre-monsoon downpour. The showers had inundated roads and left many areas without electricity for hours. Four persons, including three children, were reported dead in rain-related incidents at the time.