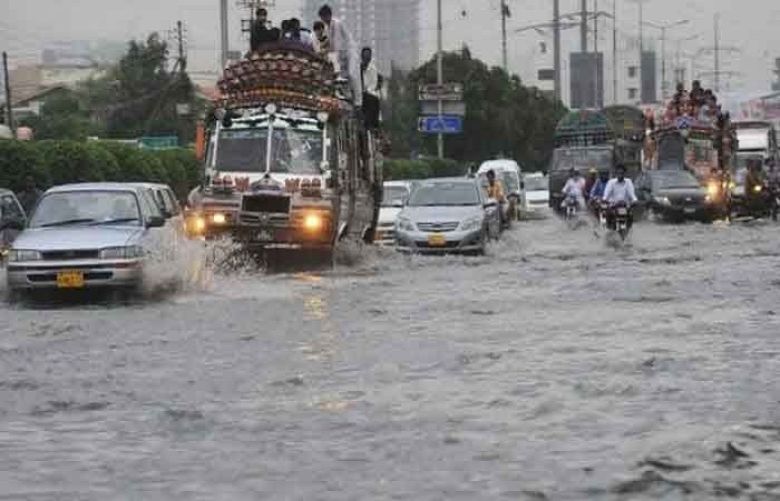 File Photo Heavy rain with thunder is expected in Karachi

Heavy rain with thunder is expected in Karachi tonight (Thursday), as forecast by the Pakistan Meteorological Department.

The second spell of winter rain started in Karachi on Tuesday as parts of the city received light to moderate rain, turning the weather cold.

The latest weather update issued by the Met department suggested that the mercury dropped as low as 15 degrees Celsius during the last 24 hours and the humidity level in the atmosphere remained 85%. Meanwhile, north-eastern winds blew at a pace of 11 kilometres per hour.

Chief Meteorological Officer Sardar Sarfaraz on Wednesday predicted a heavy spell of rain in the mega city Thursday night.
Moreover, the current rain-producing system will become more intense in Balochistan today and later spread in the highlands of the country, according to the PMD.

The rainwater drains and canals of Sibi, Mastung, Bolan, Kalat, Khuzdar, Lasbela, Naseerabad and Kohlu have a risk of flooding as a result of heavy fall of rain caused by the expected system.

According to PMD, Quetta, Pashin, Ziarat, Qilla Abdullah, Harnai and Chaman are likely to receive intense snowfall. This may block the connecting roads in these areas, therefore, the Met department has advised tourists to stay cautious.

Continuous heavy rainfall wreaked havoc in different areas of Balochistan, including Gwadar, Chaman, Ormara, Pasni, and Kech as of Wednesday.

Earlier, the chief meteorological officer had said that a westerly system is likely to enter the country on January 17 or 18 which will affect Balochistan.