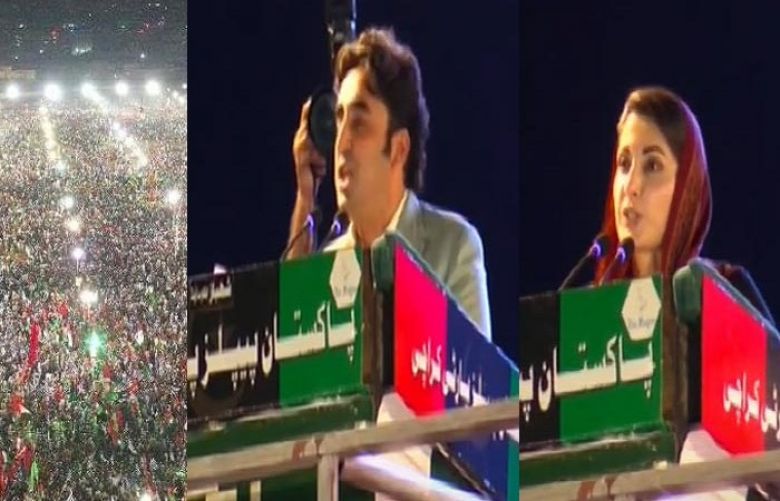 Heavyweights of Pakistan Democratic Movement (PDM) including Bilawal Bhutto Zardari, Maryam Nawaz and Maulana Fazlur Rehman have arrived at Bagh-e-Jinnah – a public park adjacent to the Quaid's mausoleum – for the second showdown of the political alliance on Sunday.

The ground is jam-packed with a huge crowd including activists and supporters of all opposition parties.

Following its first power showdown in Gujranwala two days ago, the PDM has geared up again for its second show of power today.

Hosted by the PPP, as it commemorates the 13th anniversary of the Karsaz blasts, today's event is being held at a venue that has stood witness to many a political events of the port city, and the ensuing promises of change.

Besides being addressed by the top PPP leadership, the jalsa will also be addressed by Pakistan Muslim League-Nawaz (PML-N) vice president Maryam Nawaz and Jamiat Ulema-e-Islam Fazl (JUI-F) leader Maulana Fazlur Rehman. Other political party leaders that are a part of the grand democratic alliance are also expected to attend today's event.

PPP chairperson Bilawal Bhutto Zardari, while addressing the jalsa, alleged that conspiracies are being hatched to separate Karachi from Sindh while accusing the federal government of depriving the masses of their basic rights.

“Attempts are being made to snatch the rights of the people of Sindh and Rs300 billion were not given to Sindh under NFC award,” he said and warned the federal government against “occupying” the islands near Karachi’s shore.

The PPP chief also paid tribute to the martyrs of Karsaz incident on its 13th anniversary, saying “they sacrificed their lives to write a new chapter in the country’s history”.

Bilawal said his grandfather Zulfikar Ali Bhutto and mother Benzair sacrificed their lives to strengthen the democracy in the country. “We have to fight a war for the supremacy of law, democracy and Constitution.”

The PPP stalwart said opposition’s struggle is not for the power but to ensure the right of the masses via real democratic system.

“All those doors are being closed through which rights of the masses can be ensured,” he alleged.

He said in the absence of democracy, the decisions are being made to protect the interest of few people.

Bilawal claimed that ‘selected’ prime minister Imran Khan was unaware of the issues being faced by masses including historic inflation and rising poverty.

PML-N Vice President Maryam Nawaz in her maiden address at PPP-hosted rally lashed out at the Prime Minister Imran Khan, saying she considered it “below dignity to respond to his allegations”.

She was responding to the hard-hitting speech of PM Imran wherein he mocked Maryam by calling her “Nani” [grandmother].

“I am thankful to Allah that I am not a grandmother of only one child but of two,” she said, adding that being a grandmother is matter of great pride for her.

“When I came to Karachi... I remembered Benazir Bhutto. I just met her once and she spent three hours with me and treated me as a mother would in that time. I will never forget her kindness,” said the PML-N vice president.

“You could tell how one jalsa of ours [Gujranwala rally] made PM Imran Khan shudder in his speech yesterday,” she said.

At least have the decency to respect the prime minister's office that you hold...look at the way you conduct yourself, Maryam said while addressing PM Imran Khan.

“Bilawal Bhutto respects me like his elder sister and we will always show respect for each other despite any differences,” she remarked.

Maryam expressed gratitude to the PPP leadership for giving her historic welcome in the Sindh capital, saying” “I did not find any difference between the streets of Lahore and Karachi”.

PM Imran has panicked after opposition’s first PDM rally which was clearly visible on his face, said Maryam, advising him to learn how to react during difficult time from former PM Nawaz Sharif. “When he [Imran Khan] staged a sit in Islamabad, Nawaz Sharif did not panic for once and dealt with him comfortably.”

She also said that PDM’s struggle was not against PM Imran-led government. “You have nothing to do in the fight of elders. You selected PM are just working on salary…”

Responding to allegations that her father Nawaz is speaking Indian Prime Minister’s Narendra Modi’s language, Maryam said: “You [PM Imran] prayed for the success of Modi [in elections], passed an ordinance to help Kulbhushan [Indian spy] and compromised the issue of Kashmir.”

She asked PM Imran to stop dragging army into “dirty politics” and stop being a spokesperson of the military.

The PML-N stalwart said her party salutes the Pakistan Army and those officers and soldiers who act within their Constitutional limits.

Balochistan National Party (BNP) chief Sardar Akhtar Mengal, who quit the ruling coalition earlier this year, said the example of so called democratic system prevailing in Pakistan was nowhere to be found in the world.

He said under this democracy, elected prime ministers of Pakistan were sentenced to death or banished from the country.

Mengal alleged that efforts are being made to occupy the islands of Sindh and Balochistan, saying “no one would be allowed to invade our resources”.

PkMAP chief Mahmood Khan Achakzai said PDM was not formed for mudslinging and to humiliate other political leaders but its struggle is for the rule of the masses.

Recalling the assassination of late PPP leader Benazir Bhutto and other similar incidents, Achakzai lamented that the perpetrators of terror attacks had not been taken to task up till now.

Awami National Party (ANP) leader and former Khyber-Pakhtunkhwa chief minister, Amir Haider Khan Hoti said the PTI had staged a sit-in in 2014 against elected government “whereas our [PDM] movement is against the selected government”.

Calling PM Imran ‘selected’, he said no one had approached him for NRO and added that the entire PTI would need a NRO when a decision of foreign funding case against ruling party is pronounced.

Former Balochistan chief minister and leader of National Party, Abdul Malik Baloch called upon the government to resolve the matters of restive region through dialogue with the armed groups.

Addressing the rally, he said the enforced disappearances of the innocent people should be stopped immediately and urged the PTI-led government to immediately withdraw ordinance related to Bundal Island near Karachi’s shore.

Pashtun Tahaffuz Movement (PTM) MNA Mohsin Dawar, addressing the crowd, thanked Bilawal for inviting him to the rally and giving him an opportunity to present his demands before the people of Karachi.