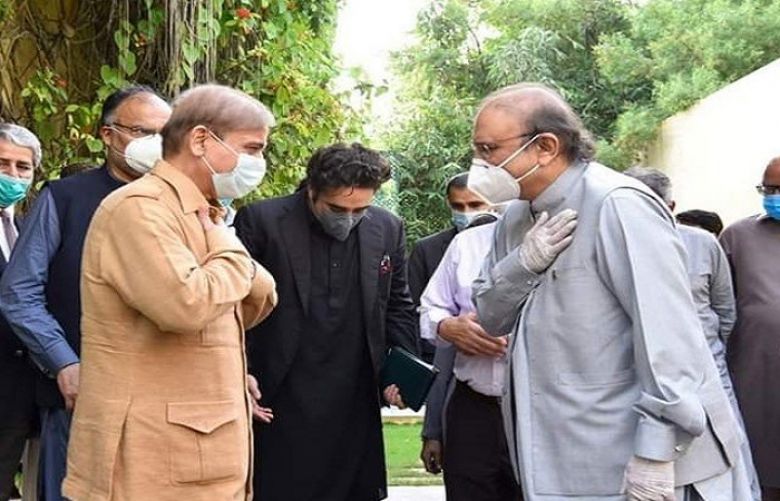 The PML-N and PPP will convene a session of the opposition Rahbar Committee tomorrow so a date for the All Parties Conference can be decided.

This was announced in a joint press conference on Wednesday held by both parties following talks between the party leaders.

PML-N stalwart Ahsan Iqbal, addressing the briefing, said that the PML-N had come to Karachi to express solidarity with the people and to ramp up efforts of rebuilding the metropolis.

"In today's meeting, the opposition parties discussed routine political matters and decided to participate in a Rahbar Committee's meeting tomorrow," he said.

Iqbal said that the opposition would respond to the incumbent government's political, economic, and governance failures by strengthening the collaboration between parties.

"The time has now come to convene an All Parties Conference," he said.

"[The opposition] will bring forward all constitutional and legal options to send this government back home and save the country from disaster," he said.

Iqbal said that the PTI-led government's "incompetence" has become a disaster for the nation as the country's economy has plunged, hatred is being spread, and Pakistan's foreign policy is such that Kashmiris have been looking to us this past year but we have failed to do anything for them.

These are some of the issues that we think are "crucial", the PML-N leader said.

"After the Rahbar Committee's meeting, an All Parties Conference will be called," he said, adding that the committee will layout the plan of action of the opposition.

Iqbal said that the Charter of Democracy, that was signed by Nawaz Sharif and Benazir Bhutto, stated that both parties — PML-N and PPP — would strive for the rule of law, an independent judicial system, freedom of press, sovereignty of the Parliament, and defend democracy.

"It was decided that none of the political differences between the parties would come in the way of their goals," he said, adding that these were the ideals that Pakistan was built on.

Iqbal said that today, the freedom of the people is being taken away and that the PPP and PML-N believe that Pakistan's future depends on Quaid-e-Azam's vision of the country — which rests with the implementation of the rule of law.

Responding to a question after the briefing ended, he said that PML-N stands with the opposition parties against the imposition of a presidential system.

"During Ayub Khan's 10 years, the presidential system was adopted; the same goes Zia-ul-Haq, Yahya Khan, and Musharraf's eras," he said, adding: "It divided the country, made it weak, and caused a sense of deprivation among the smaller provinces."

Iqbal said that after 72 years, experiments in the system of governance system were not needed and that to run the country, the 1973 Constitution was the only way to strengthen the country.

Talking about the rains in Karachi, he said that the rains were unprecedented and no less than a calamity.

"At the time of such a calamity, instead of engaging in blame games we must arrive at a solution to help Karachi get back on its feet," Iqbal reasoned.

"The federal government must take lead and sit down with Sindh [...] damage must be compensated and better infrastructure for the future must be ensured," he said.

Speaking on legislation to meet the Financial Action Task Force's requirements, he said that the opposition, fulfilling its national duty had allowed the ratification of the bills.

"The biggest evidence of this is that the foreign minister penned a letter to the leader of the opposition and appreciated the opposition's role in the process," he said.

The PML-N leader said the only legislation for which the opposition did not agree was one in which to the government sought to "bring in a black law like NAB's where anyone can be incarcerated without bail for 90 days and without any justice provided".

PML-N President Shehbaz Sharif arrived in Karachi today along with party spokesperson Marriyum Aurangzeb and former interior minister Ahsan Iqbal for a one-day visit to the city which was ravaged by torrential rains last week.

Both parties' leaders "expressed their resolve to ramp up the democratic struggle against the incumbent leadership," according to the PPP media cell.

Both sides also agreed that the federation will have to play its role for restoration of areas ravaged by the recent rains, according to PPP.

The PML-N president also paid a visit to different areas of Karachi, including Gulistan-e-Jauhar and Malir, where he met families of victims whose lives were and offered his condolences over the difficulties endured by the citizens.

“Witnessed extreme anger and anguish among the people during my visit to Malir and Gulistan-e-Johar. High time all stakeholders took this outrage as a WARNING and got down to fixing the rot. No shiny power point [presentation], social media trends/blame game can be [an] alternative to service delivery,” he tweeted along with a video of him meeting the residents of the area.

Speaking to the media earlier, Shehbaz advised the prime minister not to politicise the problems being faced by the people of Karachi and instead, help them.

“PM should not do politics and should work with the Sindh government,” he had said. He also added that the federal government should consult with the provincial government over the relief operations in the port city.

“Politics should not be done when Karachi is under water,” the former Punjab chief minister had said, adding that the city was facing “destruction”.

The opposition leader also questioned where the billions of rupees of funds announced by the federal government for Karachi had gone.