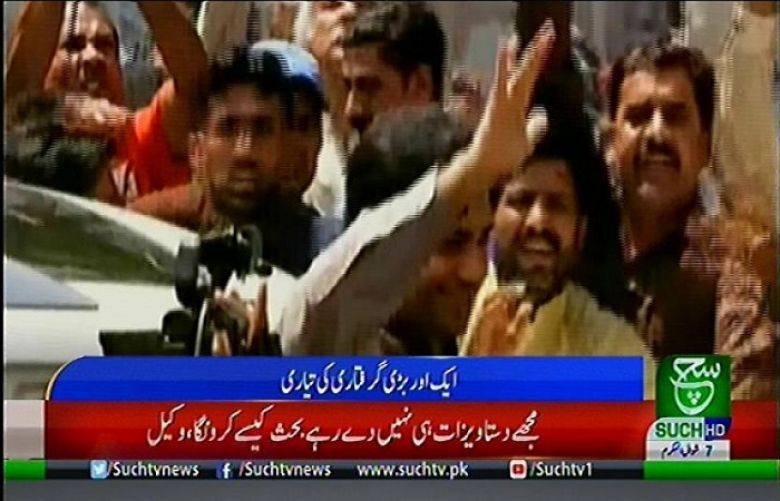 National Accountability Bureau (NAB) arrested Leader of the Opposition in the Punjab Assembly Hamza Shehbaz in three cases filed against him on rejection of bail petition.

Hamza Shehbaz  appear before a LHC bench to request an extension in his bail which expires today. He is taken into custody by the corruption watchdog in case his request for bail extension is turned down by the court.

A two-judge bench, headed by Justice Mazahir Ali Naqvi, dismissed the petitions after the PML-N leader’s lawyer requested it to allow him to withdraw the applications.

Hamza appeared before the bench to request an extension in his bail which expires today.

He is currently present in the courtroom and will likely be arrested by the NAB once he leaves the court premises.

During the previous hearing, Justice Naqvi had expressed displeasure over sloganeering by PML-N workers who accompanied Hamza to the court asking slogans are being chanted in the high court every other day, is this a high court or Mochigate?

“Why doesn’t Hamza Shahbaz join the probe like a common man?” he asked. At this, Hamza’s lawyer replied that his client had been joining the probe continuously.

The bench also censured a team of NAB over their lack of preparation in the case.

Earlier, on May 29, the Lahore High Court (LHC) chief justice had constituted a new two-member bench to hear the bail petitions of Hamza Shehbaz.

The bench, under the stewardship of Justice Ali Baqar Najafi, referred the petitions to the LHC chief justice to fix them before another bench after Hamza expressed mistrust in the bench. Justice Sardar Ahmed Naeem was other member of the bench.

During the hearing, the opposition leader said he respected the judiciary and was not afraid of his arrest.