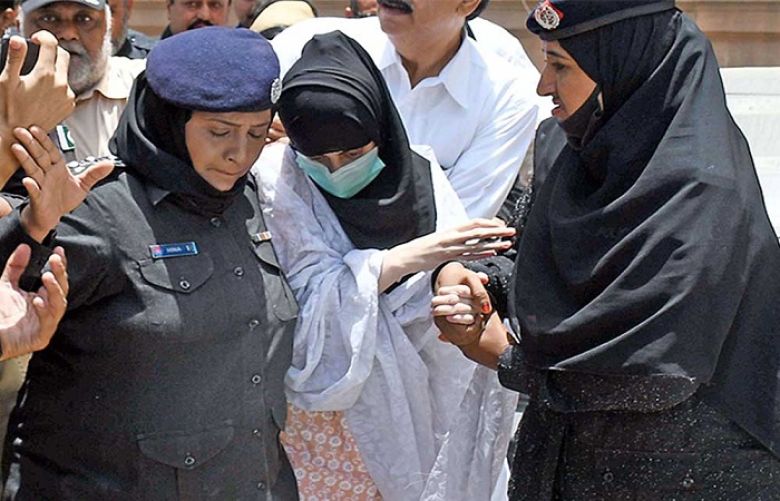 A Lahore court on Saturday allowed Sindh police authorities to take custody of Dua Zehra — a Karachi girl who was reported kidnapped in April and later discovered to have purportedly ‘eloped’ in Punjab — and shift her from Lahore to Karachi.

A day ago, a Karachi court had directed the investigating officer (IO) to produce her from the Darul Aman in Lahore, where she took shelter. The judge had directed the IO to produce the girl duly accompanied by a child protection officer on August 1 “without fail”.

“Police Inspector Muhammad Ali along-with Aziza Sultana LHC are allowed to take the custody of Dua Zehra from shelter home, Lahore to produce her before learned trial court for direction to be passed for her lodgment in shelter home, Karachi or any appropriate order as the case may be,” read the court order.

It said the inspector had earlier filed an application to grant him Dua’s custody in compliance with the Karachi court’s orders, adding that the Sindh High Court had also ordered her to be shifted to the southern metropolis.

Granting the request, the judge ruled that Ali and Sultana were responsible for Dua’s safe custody and to produce her before the Karachi court with all precautionary measures.

He further ordered the police to ensure that no one be allowed to meet her till she was produced before the judicial magistrate in Karachi.

On April 16, Dua’s parents filed a first information report alleging that their daughter had been kidnapped when she left the house to dispose of some trash. The incident had provoked an outcry, especially on social media, which had prompted authorities to take notice.

After nearly 10 days, on April 26, the teenage girl was recovered from Okara. In a video statement that day, Dua had said that she wasn’t kidnapped and had married Zaheer of her “free will”.

She had said that she had left her home of her own accord. “I have married out of free will. No one forced me. I’m happy with my husband here. For God’s sake, don’t bother me,” she had stated.

Dua had also claimed that her parents were lying about her age.

Subsequently, she and Zaheer approached a Lahore district and sessions court and filed a petition against Dua’s father and cousin.

Meanwhile, the police had also filed a plea in court demanding that Dua be sent to Darul Aman. However, the magistrate rejected the request and allowed the teenager “to go wherever she wanted to”.

On the other hand, Dua’s parents were adamant that their daughter had been kidnapped and said that she had been forced to give the statement.

The teenager’s father had also approached the SHC in May with a plea against the Punjab court’s orders. Kazmi had stated in the petition that as per her educational, birth certificates and other records, Dua’s age was 13 and under the Sindh Child Marriage Restraint Act 2013 it was illegal to marry a minor.

He had asked the court to order a medical examination of his daughter. In the following days, Karachi police repeatedly failed to produce the teenager in court earning the judges’ ire.

On June 6, the SHC ordered an ossification to determine Dua’s age. She was also sent to a shelter home for the time being after she refused to meet her parents.

Two days later, the court ruled that the teenager was at liberty to decide who she wanted to live with. During the hearing, the IO filed his report along with an age certificate issued by the office of the police surgeon which stated that as per the opinion of doctors and the Civil Hospital’s department of radiology, the bone age of the alleged abductee was between 16 and 17 years of age.

In its order, the bench said the petition had served its purpose as it was only to the extent of the whereabouts of the alleged minor/abductee.

In a dramatic turn, police on July 16 informed a sessions court in Karachi that 24 persons, including Zaheer, had been found involved in abducting her from Karachi and shifting her to Punjab, where they solemnised the illegal child marriage.

Following this, Dua approached a Lahore court on July 19 requesting to be sent to Darul Aman, citing “constant threats” from her parents while also underlining that she was “not on good terms” with Zaheer. The court accepted her application and she was shifted to the shelter home.