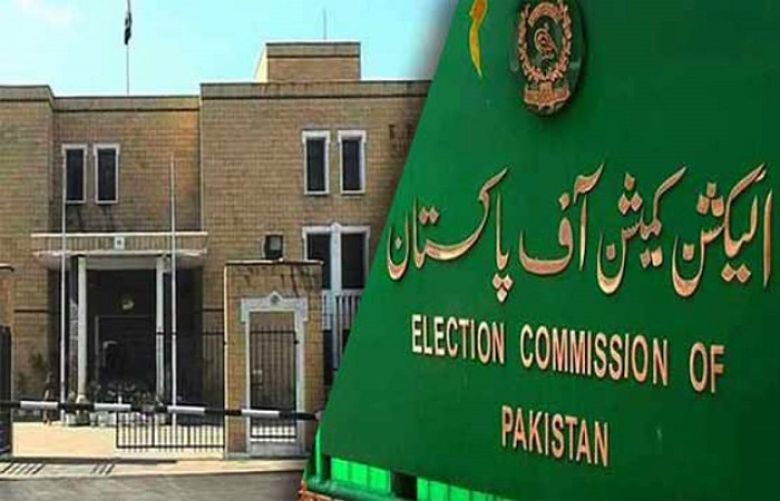 The Election Commission of Pakistan (ECP) on Tuesday reserved its verdict on a reference seeking the disqualification of 25 dissident MPAs of the PTI, who had voted for PML-N's Hamza Shehbaz in the election for the Punjab chief minister.

It will announce the verdict at 12pm tomorrow (Wednesday).

Last month, Hamza was elected Punjab chief minister, defeating PTI-PML-Q's joint candidate, Chaudhry Parvez Elahi. Hamza had bagged 197 votes, including 25 from PTI dissidents. Elahi did not get any votes as the PTI and PML-Q lawmakers had walked out of the session.

Subsequently, after a declaration by the PTI, Elahi, who is also the Punjab Assembly speaker, had sent a reference against the dissident MPAs to the ECP, urging it to de-seat these lawmakers for defecting from the PTI by casting their votes in Hamza's favour in violation of party directions.

During the hearing today, Khalid Ishaq, who was representing 10 MPAs, said the lawmakers had neither received an invitation nor the agenda for the April 1 parliamentary party meeting. In addition, only two lawmakers received show cause notices on April 7, he said.

The dissident lawmakers did not receive the declaration for disqualification sent on April 18 as well, he further said, arguing that his clients were not given the opportunity to present their stance.

"[PTI's counsel] Ali Zafar rightly said that floor crossing is a cancer [but] party dictatorship is a cancer as well."

Ishaq argued that even if party chairman Imran's instructions were "correct", the MPAs could still not be disqualified.

The lawmakers had been instructed to vote for Elahi and not be absent on the day of voting, he said. He added that the MPAs were free to vote independently once Elahi boycotted the election.

"Nowhere did the party chairman issue instructions to not vote for the opposite candidate in case of a boycott."

"A no-confidence motion was pending against Elahi. Can he send the [disqualification] reference despite that?"