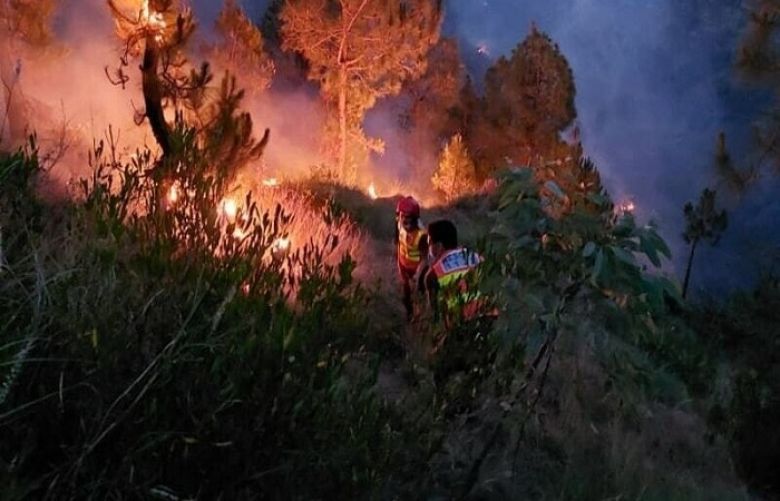 Prime Minister Shehbaz Sharif on Sunday said he has passed orders for helicopters to be flown to Swat to help the National Disaster Management Authority (NDMA) put out the wildfires that have been raging in five districts of Khyber Pakhtunkhwa for more than 24 hours.

In a tweet today, the premier said that two choppers were being immediately sent to the area at the request of the NDMA. "The full aerial support will boost the efforts of Rescue 1122, district administration & forest department to extinguish the fire," he said.

PM Shehbaz Sharif has immediately ordered the deployment of two helicopters on the request of NDMA to help put out the fire in the Swat area. The full aerial support will boost the efforts of Rescue 1122, district administration & forest department to extinguish the fire.

According to rescue officials and locals, the wildfires broke out in different areas of districts Shangla, Haripur, Swat, Lower Dir and Mohmand on Saturday.

In Shangla, firefighters struggled to contain the blaze for the second day.

The flames that affected Ali Jaan Kaprai, a village located on a mountain in tehsil Chakesar, left four members of a family dead and another injured during attempts to douse the blaze. Houses were reduced to ashes.

KP's Minister for Labour and Culture and Shaukat Yousafzai, whose constituency is Shangla, said Chief Minister Mahmood Khan has promised compensation for the families of Chakesar.

He said the administration was ordered to take all necessary steps to provide relief to the affected areas' communities and extinguishing the fire.

The authorities of the affected areas said that they had mobilised resources to put out the fires, which were destroying green trees and livestock grazing areas.

Last night, the DC and Shangla DPO Muhammad Imran made the five-hour hike to Ali Jaan Kaprai, approximately 9,000 feet above sea-level, and assured the families of helping them with all available resources.