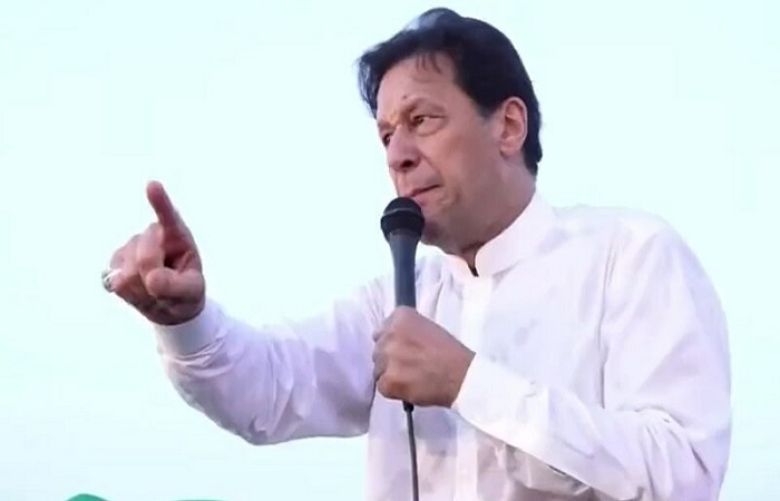 PTI Chairman Imran Khan on Monday lashed out at former ally Muttahida Qaumi Movement-Pakistan (MQM-P) during a power show in Swabi and recalled the Karachi-based party's alleged targeting of police officials in the 1990s.

Addressing a large rally in Swabi, Imran criticised the government for the way it was running the Federal Investigation Agency (FIA), which he said would be "destroyed" just like Karachi police was at the hands of the MQM.

He recalled that there was an operation against the MQM in 1996, after which it struck a deal with the then PML-N government. "The MQM then targeted and killed every police officer involved in the operation and till now Karachi police has not been able to stand on its feet," the PTI chairman said.

While Imran had always been a vocal critic of the MQM-P and its style of politics, he had stopped using the party's controversial past in his speeches after forming the government with its help in 2018.

However, their alliance was broken earlier this year when MQM-P decided to break ranks and sided with the then opposition, which has since formed the new government. The PTI leader has since resumed his criticism of the MQM-P.

He said institutions were "destroyed" in this manner when criminals were appointed as their heads. "That is why we have to combat them and protect our country against thieves and slaves of the US."

Imran also lashed out at the Sharif family for the corruption cases against them before assailing PPP co-chairperson Asif Ali Zardari and Jamiat Ulema-i-Islam-Fazl chief Maulana Fazl Rehman.

"All of them have become united in defeating Imran, but all of them will have a collective funeral," he remarked.

Calling on the crowd to reach Islamabad on his call, Imran said there was only one demand from the people: a new election date so the nation could decide its leadership.

Imran praised Khyber Pakhtunkhwa for being the province with only one PTI dissident and said it reflected the strong ethics, values, faith and loyalty of the people. He said the entire country knew about the lotas (turncoats) of the PTI but the ECP (Election Commission of Pakistan) refuses to see that way.

"It is finding ways to protect them. These turncoats will not be spared by people," he warned.