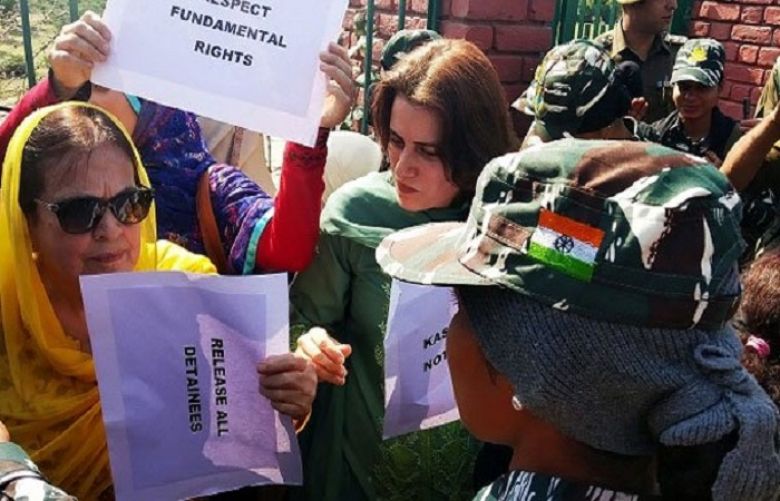 Police in India-occupied Kashmir detained at least 12 women, including the sister and daughter of former occupied Jammu and Kashmir chief minister Farooq Abdullah, for holding an anti-India protest, officials said on Tuesday.

The women, carrying placards reading “Respect Fundamental Rights” and “Why downgrade Jammu and Kashmir,” assembled on Tuesday in a park in Srinagar, the main city in the region.

Police whisked them away to a nearby police station as they tried to march through the main business area of Lal Chowk. They were likely to be released later in the day.

The protest came a day after India said it has restored call facilities on post-paid cellphone connections in occupied Kashmir after more than two months of a communications blackout.

However, the ban on more than 2 million prepaid mobile connections and internet services will continue, it said.

According to NDTV, besides Abdullah's sister Suraiya Abdullah and his daughter Safia Abdullah Khan, the wife of former occupied Jammu and Kashmir chief justice Bashir Ahmed Khan, Hawa Bashir, has also been detained.

Abdullah, 81, had been under house arrest in Srinagar since early August when India stripped occupied Kashmir of its autonomy, imposed a security lockdown and detained dozens of politicians including those who back the region being part of India. But on September 16, he was formally arrested under the Public Safety Act (PSA) and his home turned into a “judicial lockup”.

His son, Omar Abdullah, is being held at a state guest house.

In addition to Farooq and Omar Abdullah, former chief minister and People's Democratic Party (PDP) chief Mehbooba Mufti is another prominent leader put in detention by the occupied Jammu and Kashmir administration.