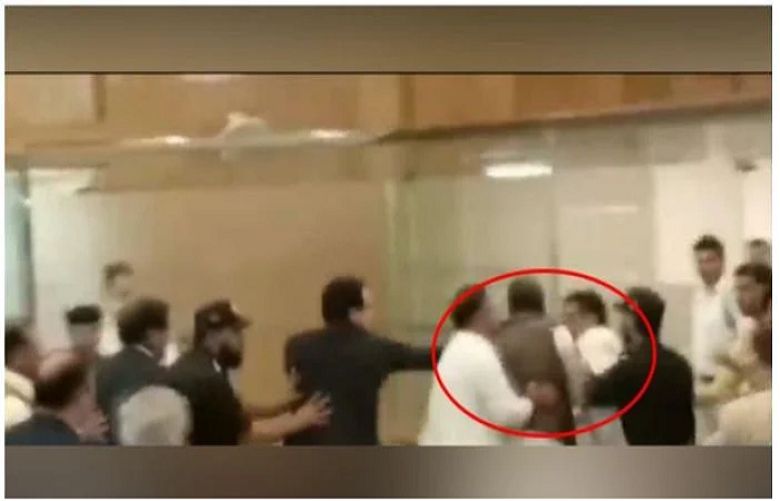 The Legislative Assembly of Azad Kashmir became a battleground Monday after members of the government and the opposition clashed with each other.

The commotion during the assembly's session started after Leader of the Opposition Chaudhry Latif Akbar's address during which he accused AJK Prime Minister Sardar Tanveer Ilyas of assuming the top post by bribing PTI Chairman Imran Khan.

The government members protested the allegations and resultantly, a heated argument broke about between the members of the government and the Opposition.

Soon thereafter, the argument took a violent turn and a PTI member of the assembly, identified as Faheem Rabbani, threw his mobile phone at former AJK premier Raja Farooq Haider.

Following the incident, PML-N workers reached the assembly building in large numbers. They tried to push the door of the building open and demanded Rabbani be handed over to them for attacking Haider.

Upon hearing about the incident, demonstrates also gathered at the Kohala-Muzaffarabad road and the Islamabad-Murree-Muzaffarabad Expressway. As a result, both roads were blocked for traffic.

Later on, Rabbani, in a video message, tendered an apology to Haider.