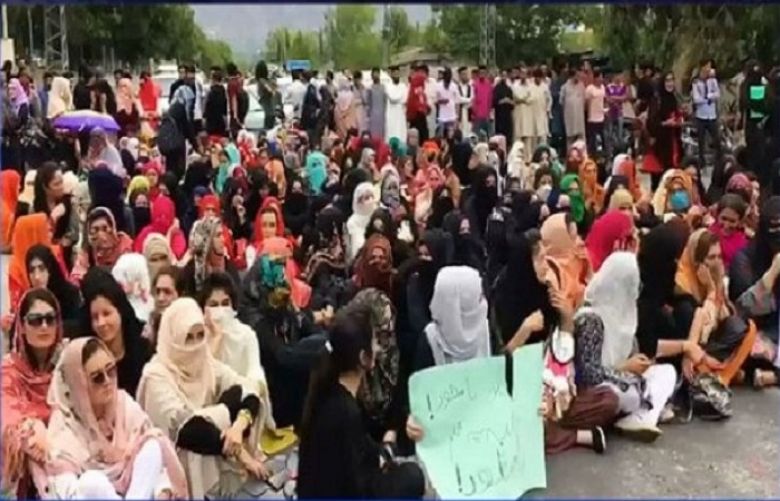 Students of the Karakoram International University (KIU) staged protest demonstration against the alleged sexual harassment of a female student by an employee of the scholarship affairs office here the other day.

About 300 students, including females, gathered outside the office of the vice-chancellor and chanted slogans against him and the administration.

The demanded protection to the female students from harassment.

Addressing the protesters, their leaders announced that the protest would continue till justice was served to the victim student.

Newly-elected member of the GB Legislative Assembly Ubaidullah Baig, who also participated in the demonstration, said harassment of students by varsity’s staff was condemnable.

“I will ask the VC that why he didn’t take notice of the incident despite passage of many days,” he said.

A female student on condition of anonymity said many harassment incidents had occurred in the past involving employees of the scholarship affairs office.

She said female students were asked for undue favours if they wanted to get a scholarship.

In an application submitted by the victim student to the vice-chancellor Dr Attaullah Shah, she wrote that she was writing the letter in a state of shock in order to let him know about the harassment she suffered at the hands of an employee namely Saeed of the varsity’s scholarship affairs office on the morning of Nov 17.

In the letter, she said that the employee teased and touched her. “I am in a state of shock and appeal to the vice-chancellor to give me justice,” she wrote in the letter.

She demanded termination of the employee.

She further stated: “It is the responsibility of the KIU administration to take action against the erring employees as I am being harassed within the premises of the campus.”

Meanwhile, according to a press release issued by the KIU public relations office, VC Dr Attaullah Shah took notice of the complaint of the female student, and set up a three-member committee to probe the incident.