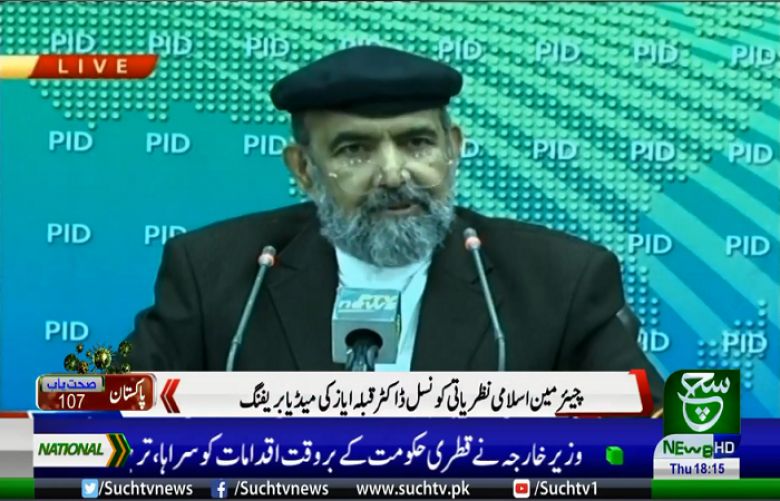 File Photo Meeting of the Council of Islamic Ideology (CII)

The Council of Islamic Ideology (CII) on Thursday endorsed the restrictions imposed by the government on Friday and daily prayer congregations and urged the public not to associate the spread of the novel coronavirus in Pakistan with any sect or religious group.

The governments of all four provinces and the capital administration have limited the number of people that can attend Friday and congregational prayers at mosques to 3-5 in an effort to curb the spread of Covid-19.

In a press briefing following an emergency meeting of the CII held today, its chairman Dr Qibla Ayaz issued the following recommendations for the government and the public regarding the pandemic:

The CII endorsed the government's restrictions on congregational prayers, saying it "expects people ... to offer prayers at home to ensure social distancing". It said the restrictions should not give the impression that mosques have been locked down, but advised people to implement the limits announced by authorities.

The council advised government authorities not to arrest mosque imams while enforcing the orders, and seek their cooperation instead so that "they become a part of the government campaign to prevent the coronavirus by adopting safety precautions".

It stressed that the spread of Covid-19 has nothing to do with any sect or religious group, including Umrah pilgrims, pilgrims to holy sites or members of the Tableeghi Jamaat. "In this regard, steps should be taken according to the law and common sense to rectify the negligence that has taken place at the administrative or individual levels," Dr Ayaz said.

The council advised able citizens to donate the funds they have set aside for Umrah, pilgrimages or other religious rituals to people affected by Covid-19's economic impact, and especially remember members of minority communities in this regard.

It called upon the government, public and civil society to jointly work to take steps for the economic relief of the people affected by the coronavirus crisis without any discrimination on religious or geographical grounds.

The CII said it will be "highly beneficial" to make arrangements to support unemployed people through mosques. It recommended treating mosques as community centres and involve mosques imams in the relief efforts.

It said arrangements should be made to give 'ghusl' (bath) to people dying from Covid-19 in the best possible manner while taking safety precautions. It added that the fatalities should be referred to as martyrs or janbahaq (dead) instead of halaak (killed).

The CII said funeral prayers should be offered for people dying from the disease and close relatives should be allowed to participate in last rites while ensuring social distancing and precautions.

It stressed that it was important to restore all human rights of the people of Indian-occupied Kashmir, who remain under lockdown during the Covid-19 pandemic. The whole world should pay attention to this issue, it added.

The council asked citizens to take all safety precautions but advised against creating "an atmosphere of fear and panic".

It called upon the government to make suitable arrangements for people stuck abroad or within the country during the outbreak.