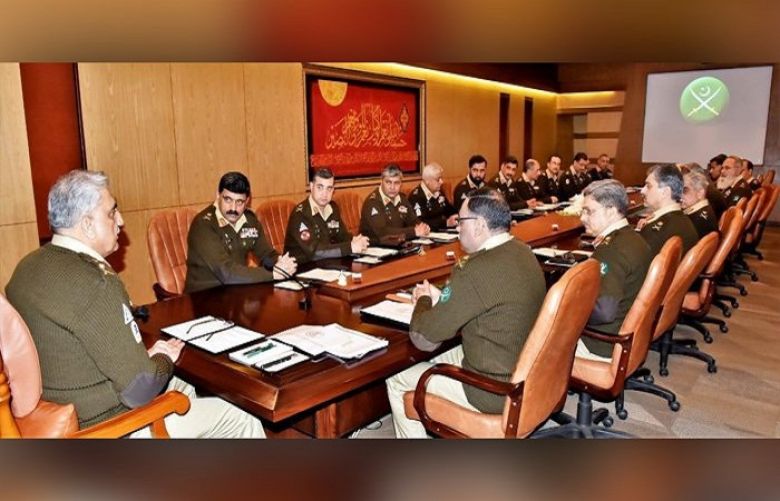 According to a statement issued Thursday by the Inter-Services Public Relations (ISPR), the meeting paid a glowing tribute to those living in the occupied Kashmir and braving a continued siege as well as the Indian Army's brutalities.

"Repression of Indian occupying forces can never deny Kashmiris their right to self-determination as promised by UN resolutions. Regardless of the ordeal, their just struggle is destined to succeed," Gen Bajwa said, as per the ISPR's statement.

The CCC also reviewed the geo-strategic situation, focusing especially on Pakistan's internal security and the situation on borders. "Provocative statements of Indian leadership are irresponsible rhetoric with implications for the region," it added.

As per the military's media wing, the commanders resolved that Pakistan's armed forces "are forces of order and peace and fully prepared to thwart any misadventure, whatever the cost".

"Forum was also apprised about the progress of 'Operation Radd ul Fasaad' which has put security situation of the country on a positive trajectory for enduring peace and stability," the press release read.

Earlier in the day, Prime Minister Imran Khan warned his Indian counterpart, Narendra Modi, saying if the latter dared to attack Pakistan, it would be his "last mistake".

Forum paid tribute to the ppl of IOJ&K braving Indian atrocities & cont siege. “Repression of Indian occupying forces can never deny Kashmiris their rt of self-determination as promised by UN resolutions. Regardless of the ordeal, their struggle is destined to succeed” COAS.(2/2) pic.twitter.com/Tof2iANg7x

"Modi, your first mistake was on August 5 when you revoked the special status of Kashmir," the prime minister said at Mirpur rally. "If you attack Pakistan and conquer it in 10 days like you said, I guarantee that each and every person in this country will fight you till the last breath.

"Our army is battle-hardened and has taken on terrorism and defeated which even the best troops in the world could not do," he remarked. "I can guarantee you now that Kashmir will now be independent."

The premier said Kashmir issue "has become internationalised" in the last six months. "Today we are a country that solves issues. Whether it is an issue with Iran and Saudi Arabia or it is about the Afghan peace process, we try our best to solve it," he added.

The PM also called out Modi over jetting on a campaign of hatred to win the elections. "Anything based on hate always ends in disaster," he said. "After he won the election he said he would do that in Kashmir what was in the RSS manifesto and revoked Kashmir’s autonomy and put it under lock-down.

"To the people of Kashmir I just want to say that our prayers are with you and I can guarantee you that you will now become independent," he added.