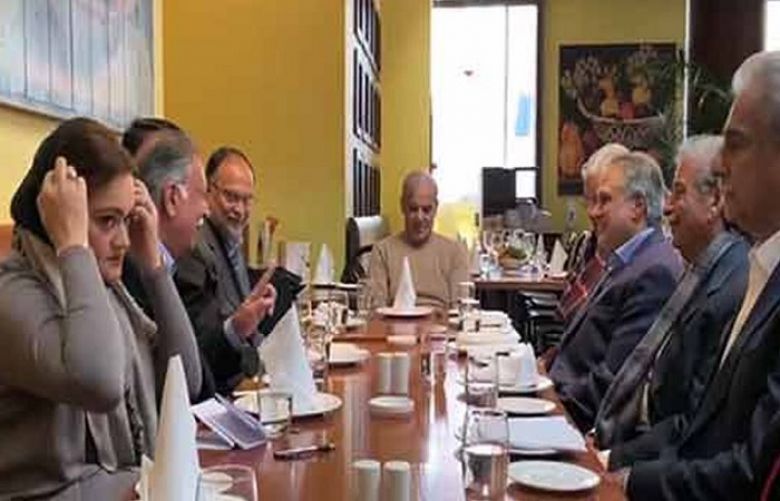 Pakistan Muslim League-Nawaz (PML-N) leaders on Saturday said the Pakistan Tehreek-e-Insaaf (PTI) government has failed on all fronts due to its incompetence and now an in-house change is needed.

The PML-N leaders who arrived in London on Friday for an important meeting, said an in-house change was needed to hold free and fair elections and to bring a democratically elected government to resolve critical issues faced by the masses.

The PML-N leaders held a meeting under the leadership of Shehbaz Sharif at a restaurant on Edgware Road where the current situation of Pakistan was discussed and a future strategy formalized. Khawaja Asif, Marriyum Aurangzeb, Rana Tanveer, Ayaz Sadiq, Ahsan Iqbal, Pervaiz Rasheed, Amir Muqam, Khurram Destagir and Ishaq Dar took part in the meeting held at Maroush Gardens.

After the meeting, the leaders visited the Avenfield apartments to meet Nawaz Sharif to inquire about his health and to update him about the decisions taken during the meeting.

Asif said the PML-N leaders had consulted Shehbaz on the political developments that had taken place over the past few days.

"We will formulate the party's policy on these matters upon our return to Pakistan," he said. The former defence minister added that the issue of the army chief's extension could not be commented upon until the issuance of the detailed judgment.

After holding a meeting with former prime minister Nawaz Sharif for around an hour and a half, Shebaz and Iqbal briefed the media outside the Avenfield apartments.

The former Punjab chief minister said Nawaz’s personal physician Dr Adnan Khan briefed the PML-N leaders about the elder Sharif’s health. He said the results of PET scans had shown his lymph nodes had grown. Shehbaz said doctors will look into the issue of lymph nodes as well as the issue of platelets’ maintenance.

Shehbaz added his brother will return to Pakistan upon the completion of his treatment and when advised by the doctors.

Speaking about the political situation of the country, the PML-N president said, “The atmosphere of Islamabad is gripped by the culture of jaadu toona (magic)”.

He added PML-N wanted the best to become members of the Election Commission of Pakistan (ECP) which is was the reason behind his letter to the prime minister.

“Our experience in the recent past with Imran Khan had been extremely disappointing, but despite that, I wrote to him again. We believe we should talk about these critical issues, develop a consensus and chose the best candidates.”

Adding on about the issue of Army Chief General Qamar Bajwa’s extension, Iqbal said the issue of army chief’s extension was discussed in the meeting and it was decided, the PML-N would comment on this issue after looking at the detailed judgment by the Supreme Court.

He said the extension of army chief’s tenure should have been dealt with in a routine matter. “The government had time from August to November to go through all rules and aspects but they deliberately made it complicated and brought embarrassment to our armed forces.”

Iqbal added the appointment of CEC members was known for ages but this appointment was delayed and then the leader of the opposition had no choice but to write to the court.

The PML-N leader accused the prime minister of failing the people of oppressed Kashmir by not doing anything for them in more than four months. He added, the premier had announced he would be an ambassador for Kashmiris, however, his government had not done anything for people of the valley.

“The government has failed to get international support for Kashmiris while lockdown and curfew continues in the valley,” he added.

Iqbal further said PML-N would be joining other parties to protest against inflation and failure of the government to provide relief to ordinary people of Pakistan. He said that food inflation was above 16 per cent which was affecting the poor people of the country.

“The PTI government’s agenda is to divert the attention of the people from the real issue by attacking the opposition with baseless allegations and lies,” he added.