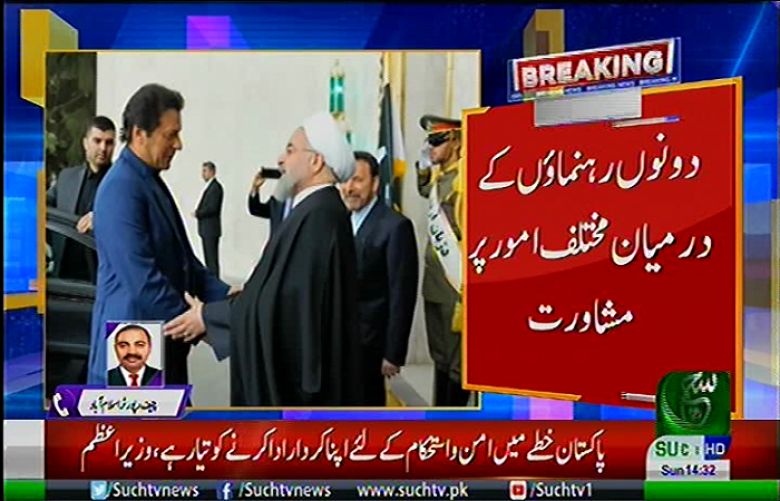 Addressing a joint press conference with the Iranian president, PM Imran said, “War between Saudi Arabia and Iran should never happen. The issue is complex but can be resolved through dialogue”.

“Pakistan does not want any conflict in the region,” PM Imran said.

The prime minister added Pakistan had suffered 70,000 casualties in war on terrorism and neighbouring Afghanistan also suffered badly in the conflict going on in that country.

The premier added Saudi Arabia was one of the closest friends of Pakistan and Riyadh had always helped us in all times of need. He emphasised that Pakistan does not want any conflict between Iran and Saudi Arabia while recognising that it was a complex and complicated issue.

“This visit to Iran and the visit which I will undertake to Saudia Arabia on Tuesday, is a Pakistan led initiative. I will go with a positive mind to Saudia, Pakistan will play the role of a facilitator,” PM Imran said.

He added Pakistan was willing to host both countries in Islamabad.

“When I was in New York, I was asked by US President Trump to facilitate these talks and we will do all what we can. We would facilitate so that sanctions can be lifted, a nuclear deal can be signed”, the prime minister said.

The prime minister said they [Pakistan] would facilitate talks so sanctions [from Iran] can be lifted.

Iranian president appreciated the steps taken by Pakistan to de-escalate the situation in the region.

The prime minister in the meeting said Pakistan attaches high importance to bilateral ties with Iran. "Pakistan is willing to play its role towards strengthening peace and stability in the region," PM Imran was quoted as saying.

The prime minister arrived in Tehran as a part of his initiative to promote peace and security in the region. He was received by Iranian Foreign Minister Javad Zarif with whom the prime minister also held a meeting.

The prime minister who is on his second visit to the country will also meet Supreme Leader Ayatollah Sayyed Ali Khamenei during his visit.

Besides the issues relating to peace and security in the Gulf, PM Imran will discuss gulf security issues in meeting with the Iranian leaders.

The prime minister also had a bilateral meeting with the Iranian president on the sidelines of the 74th UN General Assembly session in New York last month.

PM Imran last month said that both the United States and Saudi Arabia had asked him to mediate with Iran to defuse tensions in the Gulf.

There have been a spate of still unexplained attacks on shipping in and around the vital seaway involving Iran and Western powers, as well as drone attacks on Saudi oil installations.

Washington accused Tehran of attacking the vessels with mines and to be behind the drone assault, something Tehran strongly denies.

On Saturday, Javad Zarif welcomed efforts for mediation with Saudi Arabia ahead of Prime Minister Imran Khan's visit to the country.

"We've always been open to discussing anything with Saudi Arabia. Saudi Arabia is our neighbor. We're going to be here together permanently," Zarif said in an interview with TRT World.

The confirmation came after the Foreign Office on Thursday said PM Imran was likely to visit Saudi Arabia and Iran, weeks after Islamabad said Washington had asked it to mediate with Tehran.

The announcement of the possible visit comes after PM Imran last month said that US President Donald Trump had asked him to help defuse tensions in the Middle East.

The prime minister, after a meeting with the US president on the sidelines of the United Nations General Assembly in New York, had said that he was “trying and mediating” and had also spoken with Iran’s President Hassan Rouhani.

Washington had blamed Tehran for an attack on the world’s biggest crude oil processing facility in Saudi Arabia a few weeks ago.