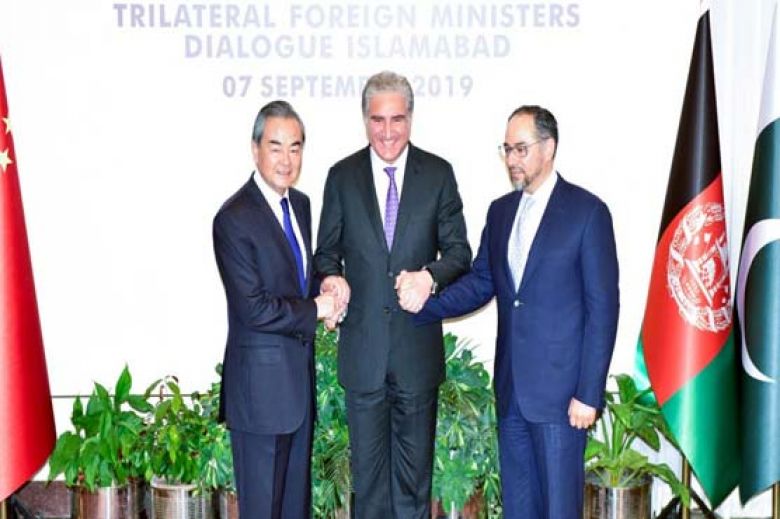 Earlier, Chinese Foreign Minister Wang Yi has arrived in Islamabad to attend the third round of China-Pakistan-Afghanistan trilateral meeting.

Earlier, Chinese Foreign Minister Wang Yi has arrived in Islamabad to attend the third round of China-Pakistan-Afghanistan trilateral meeting.

The third round of China-Afghanistan-Pakistan Trilateral Foreign Ministers  Dialogue was held in Islamabad on Saturday.

Foreign Minister Shah Mahmood Qureshi chaired the meeting which was attended by his Chinese and Afghan counterparts, Wang Yi and Salahuddin Rabbani respectively, along with their respective delegations.

The agenda of the meeting focused on political relations, Afghan peace process, and security cooperation. Issues relating to development cooperation, counter terrorism, and promotion of mutual contacts were also discussed in the meeting.

The forum was established two years ago, and the earlier meetings were held in Beijing and Kabul in 2017 and 2018.

The three sides noted with satisfaction the progress made under the trilateral cooperation since the 2nd Dialogue held in Kabul, on 18 December 2018, Joint statement said.

The three sides condemned the recent terrorist attacks in Kabul, Konduz, Baghlan and Farah, which have taken many innocent civilian lives including women and children.

China, Afghanistan and Pakistan, while closely following recent developments in the regional situation, reiterated their support for a politically negotiated settlement of the conflict in Afghanistan. In this regard, they took note of the talks between the U.S. and the Taliban.

They expressed hope that intra-Afghan negotiations including direct negotiations between the Islamic Republic of Afghanistan and the Taliban begin soon and lead to full cessation of violence bringing lasting peace for the people of Afghanistan. They particularly underlined the need for an inclusive, Afghan-led and Afghan-owned peace process leading to a comprehensive agreement for durable peace and stability in Afghanistan.

Based on respect for the will of the Afghan people, while appreciating the efforts made by the Government of Afghanistan, China and Pakistan expressed their continued support for Afghanistan’s peace and reconciliation process as well as for the efforts towards reconstruction and economic development in the country.

The three sides reaffirmed their commitment to further strengthening their relations, exploring new ways of deepening cooperation, including advancing connectivity under the Belt and Road Initiative (BRI), Regional Economic Cooperation Conference on Afghanistan (RECCA) and other regional economic initiatives.

The three sides agreed to explore China-Afghanistan-Pakistan plus cooperation, as well as working towards promoting trade and connectivity projects between Afghanistan and Pakistan, such as Kabul-Peshawar Motorway.

The three sides welcomed the progress made on implementation of projects agreed under the China-Afghanistan-Pakistan Practical Cooperation Dialogue (CAPPCD). They agreed to continue cooperation in the fields of economic development, capacity building, improving livelihood and people-to-people exchanges.

China expressed its readiness to support construction of refrigeration storages, clinic centers, drinking water supply schemes and immigration reception centers at crossing points between Afghanistan and Pakistan to facilitate the movement of people and trade activities among the two countries.

China, Afghanistan and Pakistan reiterated their strong resolve to fight terrorism in all its forms and manifestations and without any distinction. They reaffirmed commitment of not letting any terrorist organization, element or individual use their soils against any country.

They also decided to work towards effectively implementing the trilateral MoU on Cooperation in Counter-terrorism, signed at the 2nd round of Trilateral Foreign Ministers’ Dialogue held in Kabul, and agreed on a list of initial projects of enhancing counter-terrorism cooperation in this regard.

They recognized the need to continue their joint fight against ETIM and its supporters and facilitators. The three sides committed to promote measures to counter terrorist s logistical capabilities including terror-financing, recruitment and training.

The three sides agreed to take advantage of the trilateral Vice-Ministerial Strategic Dialogue, the Vice-Ministerial Consultation on Counter-Terrorism and Security, and the Director-General Level Practical Cooperation Dialogue to implement the consensus of the 3rd Foreign Ministers’ Dialogue.

Foreign Minister Shah Mehmood Qureshi addressing the post dialogue press conference said that the next round of talks between the three countries will be held in Beijing. The foreign minister said that strengthening regional ties will help all the parties.

He further said that in the next phase of US-Taliban negotiation, an inter-dialogue will take place in Afghanistan.

FM Qureshi also spoke of the talks with Afghan President Ashraf Ghani on the sidelines, saying it seemed quite useful and he has extended the invitation of the inauguration ceremony of 24 hours’ service at Torkham border to him.

The foreign minister said that they are hopeful for the Afghan peace process, adding that Pakistan and Afghanistan need each other.

Earlier, China reaffirmed its support to Pakistan and reiterated opposition to any unilateral action as well as the measures that could further complicate the situation following India s unilateral and illegal actions in Occupied Jammu and Kashmir.

The support was expressed by Chinese Foreign Minister Wang Yi during delegation-level talks between Pakistan and China.

Wang Yi highlighted that Pakistan-China relationship is based on mutual respect, trust and strong bonds of friendship.

He appreciated Pakistan s efforts to achieve goals of national development and extended China s utmost support in this regard.

Chinese Foreign Minister emphasized that CPEC is a demonstration project of high quality BRI projects and is being implemented jointly by Pakistan and China.

Both countries have complete consensus on the future direction of CPEC to advance high quality development in Pakistan.

He underscored that Pakistan s economic and financial situation was improving and the central banks of both countries must deepen their cooperation to reap dividends at a larger level.

Foreign Minister Shah Mahmood Qureshi briefed the Chinese side on the evolving situation in Occupied Kashmir.

He stressed that the ongoing curfew for over four weeks, the continued lock-down and communications blockade, and the massive human rights violations had created a dire humanitarian situation in the held area which needed to be urgently addressed.

Foreign Minister informed the Chinese side of the intensification of ceasefire violations across the Line of Control and emphasized that India could attempt a false-flag operation in order to divert attention from its crimes in Occupied Kashmir.

He conveyed that Pakistan is grateful for China s support in the aftermath of India s illegal and unilateral actions.

He emphasized that friendship with China is the corner stone of Pakistan s foreign policy.

He said that Pakistan will continue to support China on all issues of its core interest, including Taiwan, Tibet, Xinjiang and Hong Kong.

The Foreign Minister reiterated Pakistan s commitment to the timely completion of CPEC projects, especially those in Gwadar.

The two delegations had an in-depth exchange of views on the entire spectrum of bilateral relations and regional matters, particularly the current situation in Occupied Kashmir.

Both sides also noted with satisfaction the bilateral cooperation at multilateral fora and reaffirmed their commitment to the purposes and principles of the UN Charter and support for multilateralism, free trade and win-win cooperation.

They resolved to implement consensus reached by the leadership of two countries to deepen strategic consultation and coordination at all levels so as to jointly promote regional peace, stability and prosperity.