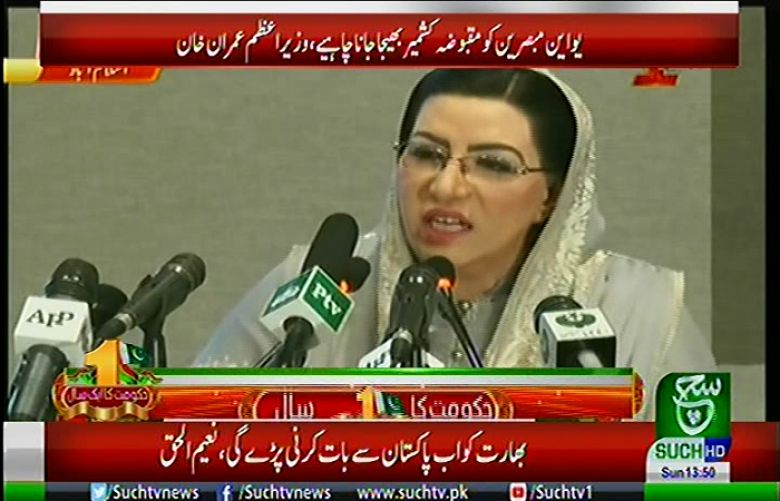 A ceremony to mark the completion of one year of the government of Pakistan Tehreek-e-Insaf was held in Islamabad on Sunday.

In her address, Special Assistant to Prime Minister on Information and Broadcasting Dr. Firdous Ashiq Awan said today is very important day as the government has completed its one year tenure.

She said this day is dedicated to struggle of oppressed Kashmiri brothers and sisters for their right to self-determination.

The Special Assistant said the government in a short period of one year corrected the course through strong foundations, hard work, and honesty.

Firdous Ashiq Awan said Prime Minister achieved historic electoral success after a political struggle of 22 years and his vision is to transform Pakistan on the principles of State of Madinah with characteristics of merit, justice, rule of law, social welfare and austerity.

She said under this vision, reforms are being introduced in all government ministries and institutions and the Prime Minister is personally supervising the reforms agenda of the government.

She said noticeable improvements have been made in postal services, NHA, railways, and many other government departments.

Referring to her ministry, Dr. Firdous Ashiq Awan said reforms have been brought in PTV and it is becoming a profitable institution now.

She said the links between Associated Press of Pakistan are being increased with international news agencies so that it projects positive image of Pakistan abroad.

Firdous Ashiq Awan said through our policies and reforms process, we will also turn Radio Pakistan into a profitable institution so that it truly becomes voice of 220 million people.

Earlier, addressing the ceremony, Special Assistant to Prime Minister Naeem ul Haq said Pakistan is passing through a turning point in history in the backdrop of Kashmir situation.