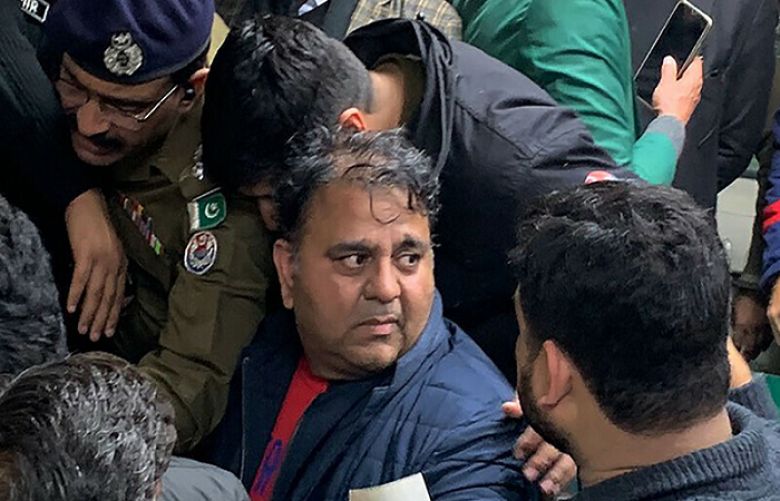 After apprehending Fawad in Lahore early on Wednesday, police presented Fawad Chaudhry before duty magistrate Naveed Khan in the Islamabad District Court. Fawad had been booked on Tuesday evening in the Kohsar police station for allegedly threatening members of the Election Commission of Pakistan (ECP) and their families.

When presenting him before the court on Wednesday, the police sought eight-day physical remand of Fawad.

The court, which initially reserved its verdict, rejected demands of the police and granted only two-day physical remand of PTI leader.

This meant that the plea by Fawad and his lawyers that the court dismiss the case outright was also rejected.

As the court announced the reserved judgement, Fawad Chaudhry was medically examined by doctors at the Pakistan Institute of Medical Sciences (PIMS) where doctors declared him healthy.

There were reports of clashes among PTI supporters and the Islamabad Police at PIMS in which a PTI worker sustained injuries.

Senior Pakistan Tehreek-e-Insaf (PTI) leader Fawad Chaudhry was arrested by Islamabad Police from Lahore on wee hours of Wednesday under the charges of talking against Election Commission of Pakistan (ECP) and its members.

A case had been registered against Fawad Chaudhry in Islamabad’s Kohsar police station on the application of ECP secretary; who blamed PTI leader for talking against the commission and chief election commissioner.

The first information report (FIR) was filed against him for his speech where he allegedly stated that the status of the ECP is the same as a ‘secretary’ and the ‘chief election commissioner signs documents like a clerk’.

The former minister was arrested shortly after he held a press conference in Lahore, where he threatened the members of the ECP and their families with repercussions if “those involved in the May 25 incident,” were appointed (in Punjab caretaker setup) or retained in their positions.

He also strongly criticized the appointment of Mohsin Naqvi as Punjab’s caretaker chief minister and stated that “those who are being appointed as the caretaker of [Punjab] government will be followed until they are punished”.

He also reported to have lodged a formal complaint with the ECP against the appointment of those directly involved in the crackdown in Punjab.

Islamabad Police had taken the ex-minister to Lahore Cantt Kutchery, where he would be produced before the court.

Strict security arrangements were taken with deployment of additional police force in and outside the courtroom.

The FIR registered against PTI leader stated that Fawad Chaudhry had been threatening ECP members and their families, after the appointment of Punjab caretaker chief minister.