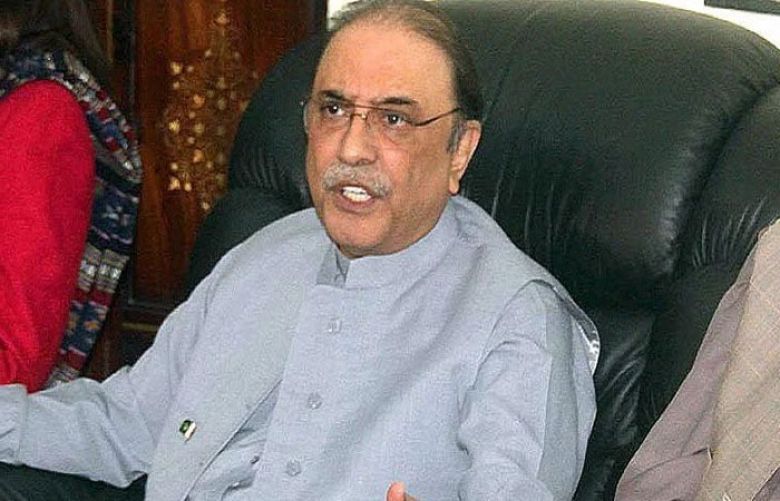 In an interview with a private news channel on Thursday, the former president insisted that holding early general elections in the country is neither good for the PTI nor democracy.

The PPP leader also said that they would contest elections if PTI succeeds in dissolving the Punjab and KP assemblies. “We shall see how many MPAs can the PTI get elected.”

He added that they would continue to play the role of the opposition if the assemblies are not dissolved.

The PPP insisted that there should be a change of government in Punjab as the coalition parties had the numbers, and they could be increased in the days to come.

"We will speak to Pervez Elahi, but we have other choices as well."

In response to a question regarding the no-confidence motion in Khyber Pakhtunkhwa — where the PTI has been in power since 2013 — Zardari said: “We [PDM] has seats in KP as well but some of our friends were misguided and we need only need to bring them back.”

Zardari, addressing allegations levelled against him for being involved in horse trading at the time when a no-confidence motion was tabled against Khan, questioned which National Assembly members were bought by the PDM, adding that these matters aren’t just about bribing the people and dissolving assemblies. “I didn’t buy anybody there was no need,” he asserted.

The statement from the PPP co-chairman comes at a time when several PTI lawmakers in Punjab, according to sources, have advised the party's chairman, Imran Khan, against dissolving the provincial assembly immediately.

'Is this your popularity?'

Taking a jibe at Khan, the ex-president said in the last two months, he had himself shot and then, just managed to gather 25,000 people. "Is this your popularity?"

The PPP leader said his party was ready to face Khan "anywhere and everywhere" as it was not an issue. He added that PPP was strong in Punjab as the leaders were with the party for the last 40 years.

"Yes, since we did not come into power for the last 30 years we have fallen a bit weak there, and we are trying to overcome those setbacks," he said.

The former president said the National Accountability Bureau (NAB) should hold Khan accountable and that the government would not resort to the politics of revenge.

"Also, anyone can get arrested before the elections, even Imran Khan. His [Khan's] game is big, and its foundations are abroad," the PPP co-chairman said.

‘If they want to talk they can talk to Mian sb’

Responding to a question regarding President Dr Arif Alvi, who belongs to PTI, Zardari said that to comment on the president’s impeachment would be too early.

“The president has no power what are we going to take from him,” he said, however, the PPP chairman didn’t rule out the possibility of tabling a no-trust motion against the president.

Regarding negotiations with PTI, Zardari said that dialogue can be held with PTI as well, “but for negotiations, people need to fix their characters.”

“If they [PTI] wants to talk to the coalition government they can talk to Mian [Nawaz Sharif] sahib,” he said.

‘I do not know COAS Gen Asim Munir’

Expressing his unfamiliarity with the newly appointed Chief of Army Staff (COAS) General Asim Munir Zardari said he did not know “the person who is appointed as the new army chief”.

The PPP leader said that in line with the decision of the institution, the senior officer has been appointed as the army chief. He maintained that the former army chief had never asked him for an extension in the tenure of his service.

“A new thought and wind will blow in the country,” Zardari stated.

Berating PTI, Zardari said: “If Khan had taken a wrong decision, it would have been more difficult for the nation.” He maintained that they have restrained the PTI chair from doing so.

“Conspiracy narrative and waving paper [US cypher] are non-serious things,” he added.

Referring to PTI’s allegations about the diplomatic cable, the PPP leader asked, “Why did you want to get into the bad books of the US for your whole life? Go alone in their bad books, why do you [Khan] want to take Pakistan along with him.”