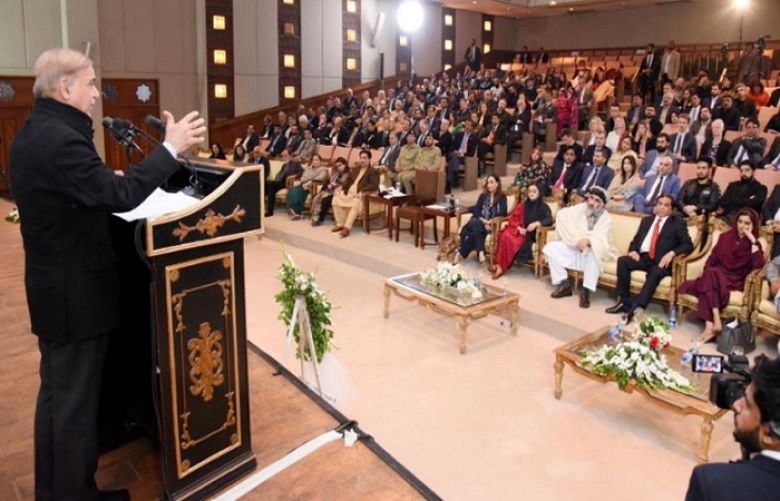 Prime Minister Shehbaz Sharif has urged the world community to stand up and take practical measures to deal with the issue of climate change.

He was addressing a ceremony organized in Islamabad on Thursday to pay tributes to all the stakeholders including international partners for successful climate diplomacy at Sharm-al-Sheikh climate summit.

The Prime Minister appreciated the role of Foreign Minister Bilawal Bhutto Zardari, Climate Change Minister Sherry Rehman, Information Minister Marriyum Aurangzeb and other government departments that worked continuously for making the world believe that we are seeking climate justice, not charity. He said they also made the world realize that what has happened to Pakistan can happen with any other nation.

The Prime Minister expressed deep gratitude to all those countries that came to help Pakistan with cash and kind during recent devastating floods. The Prime Minister said the contribution of all the friendly countries was most valuable in this hour of need.

He further said world must realize that Pakistan became the victim of something which has nothing to do with us as our share in Carbon emission is less than one percent.

In her address, Minister of State for Foreign Affairs Hina Rabbani Khar said Securing agreement on the establishment of loss and damage fund was our core objective at the COP-27.

She said we felt this emergency after the floods hit us in this summer. As chair of G77 and China, the Foreign Minister chaired the meeting in New York where we were agreed to pursue this matter on priority.

On arrival at COP-27, Pakistan steered the group in securing inclusion of the item of financing loss and damage in COP's agenda.

After two weeks of intense negotiations, consensus was finally reached on the establishment of Fund for addressing the loss and damage.

The creation of this Fund is widely recognized as the major outcome of COP-27.

She said things are not going to remain stable in many parts of the world if current level of climate stress is not addressed in resilience rebuilding.