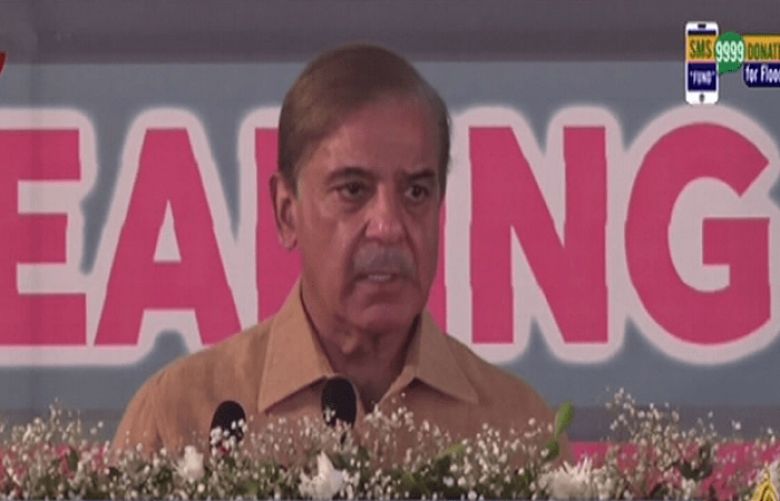 Prime Minister Shehbaz Sharif said on Friday that the audio leak of PTI chief Imran Khan had “shattered the narrative” that the latter was ousted from power through a foreign conspiracy.

“Everything became clear after Wednesday’s audio leak,” he said, adding that Imran’s “detestable face” had been revealed to the entire nation.

Addressing a ceremony after laying the foundation stone of the Bhara Kahu bypass in Islamabad, the premier went on the accuse the PTI chief of deceiving the nation by making false claims.

“Till when will [your] lies survive … I don’t think there can be a more heinous crime,” he commented.

The premier’s remarks follow a series of audio leaks linked to the Prime Minister’s Office, the latest of which featured a conversation between Imran and Azam Khan, his principal secretary while he was the country’s chief executive, about a cypher that he has long touted as evidence of an alleged foreign conspiracy to remove him from the top office through a no-confidence vote.

In the clip, the former prime minister can be heard telling Azam to “play up” the cypher and turn it into a foreign plot to oust his government. He, however, adds that there is no need to name any country. “We only have to play it up. We don’t have to name America. We only have to play with this, that this date [of the no-trust vote] was [decided] before.”

To this end, Azam his heard suggesting to Imran to call a “meeting of then-foreign minister Shah Mahmood Qureshi and foreign secretary wherein we will ask Shah Mahmood Qureshi to read out the letter. So whatever he will tell us, I will type it down and convert it into [meeting] minutes” so that it becomes part of the office record.

Referring to audio recording in his speech today, PM Shehbaz accused Imran of asking his then-principal secretary to “hatch a conspiracy against Pakistan”.

The premier went on to say that he had not seen a “more irresponsible person and a bigger liar” than Imran during his time in politics.

“And this is something that needs to be lamented and calls for introspection,” he said.

After leading the cricket team to win the World Cup and making the Shaukat Khanum Memorial Cancer Hospital and Research Centre, nobody would have thought of Imran as an “embodiment of lies” that he turned out to be after entering politics, he added.

“He has lied day and night, damaging Pakistan.”

PM Shehbaz went on to say the entire nation was “ashamed” because of Imran lies about a foreign conspiracy to oust his government.

By doing so, he continued, Imran has “put the honour of the entire nation at stake and brought shame to Pakistan”.

“For five to six months, he continued to claim that a conspiracy was hatched against his government,” he said, lambasting Imran for labelling the former opposition as “traitors”.

“And Imran even conspired to divide the country’s institutions,” PM Shehbaz alleged. “There are no two ways about it. But the worst conspiracy against Pakistan was him defaming the country’s politicians by labelling them as traitors.”

Everything became clear after Imran’s audio leak, he reiterated, regretting that the nation’s “five months were wasted” as the PTI peddled its foreign conspiracy narrative and “poisonous propaganda”.

The premier went on to allege that Imran had angered friendly countries.

“I have taken an oath under the Constitution so I cannot reveal this secret … but some friendly countries personally told me how arrogant he (Imran) had been and that damaged our ties,” PM Shehbaz said. “Moreover, Imran also angered other nations, but it will not be right to go into the details.”

The premier said it was pointed out to him during his trip to the US and at other instances that “we have taken a huge burden on ourselves, otherwise his (Imran’s) popularity was declining.

“I told them I did it to save the state of Pakistan.”

Without naming anyone, he further claimed that Imran “had gone to a country and begged them for money”.

“But they told him to put his house in order first. He begged them to announce the release of funds so that he gains respect in his home country before being removed from office.”

The prime minister said even after these events unfolded, he was ready to “invite everyone to come and build Pakistan together”.

“Look beyond yourself and set aside [your] differences,” he urged Imran but went on to say that the PTI chief did not want Pakistan to progress.

“You are conspiratorial,” he said.