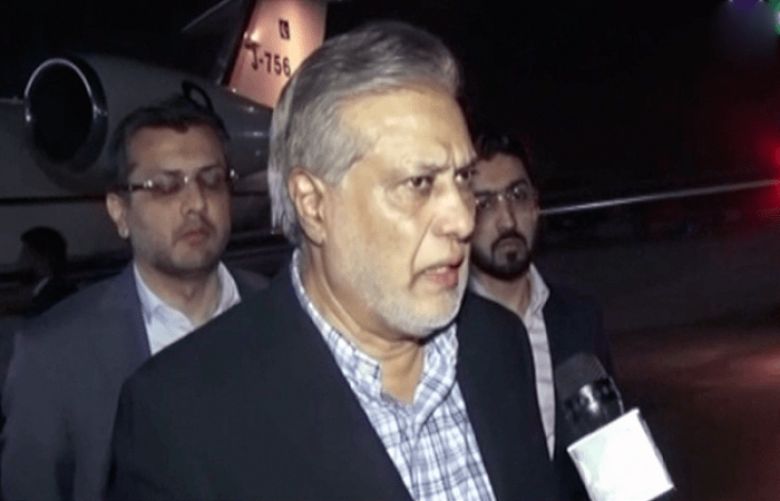 Senior PML-N leader Ishaq Dar returned to Pakistan on Monday night after an exile of more than five years.

The former minister landed at the Nur Khan Airbase in Chaklala, Rawalpindi. He accompanied Prime Minister Shehbaz Sharif on his trip back to the country from London.

Talking to reporters at the airbase, Dar said that PML-N supremo Nawaz Sharif and the premier had tasked him to take over the portfolio of the finance minister.

Dar further expressed hope that “we will now head in a positive direction”.

Dar’s return has been under speculation for months with certain top members of the PML-N — like Maryam Nawaz and Javed Latif — on several occasions publicly attacking and disowning his policies, in particular, the inevitable reversal of the costly fuel subsidy introduced by the previous PTI government.

Last week, an accountability court had suspended an outstanding arrest warrant against Dar, paving the way for the former finance minister’s return from London.

Accountability Court Judge Mohammad Bashir issued a suspension order for a perpetual warrant of arrest against Dar, which was issued on December 11, 2017, after he absconded from an assets-beyond-means case. The warrants were suspended until October 7, giving the senator-elect a fortnight to surrender to the law.

The court’s decision gave credence to speculation that Dar was returning to the country to take over as finance minister from the beleaguered Miftah Ismail.

However, the confirmation came earlier today when Miftah tendered his resignation to senior party leaders in London. Subsequently, a statement was released by PML-N confirming that Nawaz Sharif and PM Shehbaz had nominated Dar as the finance minister.

A source quoted Nawaz as telling the participants that the party has “lost political capital” and that Dar should work to regain it.