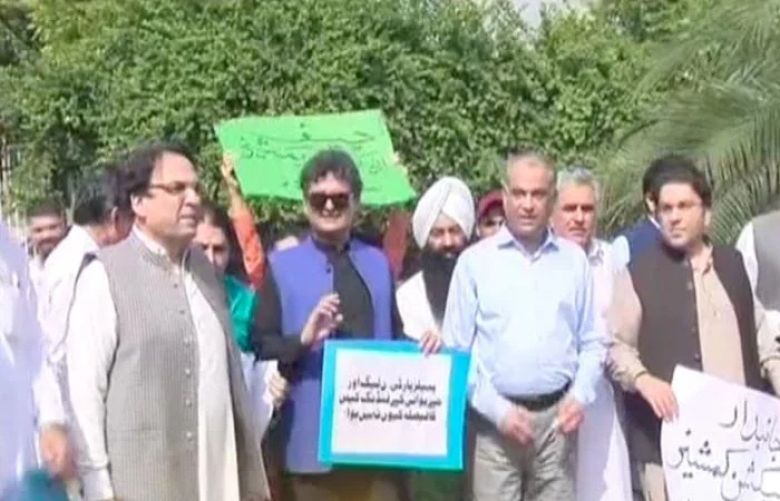 PTI lawmakers converged outside the Election Commission of Pakistan headquarters in Islamabad on Wednesday, answering the call of party chairman Imran Khan — who had urged people to protest against the election body as well as Chief Election Commissioner Sikandar Sultan Raja — in defiance of district administration orders barring any protest inside the Red Zone.

Placard carrying protesters climbed over barbed wire that was installed to prevent any entry into the area and had a brief run in with police, who successfully dispersed them.

Speaking outside the ECP office, the parliamentarians demanded the resignation of the CEC.

"Getting rid of Imran Khan is as difficult as proving Nawaz Sharif trustworthy," said Fawad Chaudhry.

Ejaz Chaudhry, for his part, said: "If you want accountability, first be accountable about your own palaces."

Khan, earlier in the day, announced a change in the party's protest venue, urging supporters to gather in Islamabad's F9 Park to demonstrate instead of outside the body's headquarters as previously announced.

"Today I am calling all our people to come out in peaceful public protest against CEC & ECP in F9 Park at 6pm. I will be addressing the gathering between 7pm and 7:30 pm," he wrote on Twitter.

After the party decided to change the protest venue, the district administration granted it permission to gather at F9 Park and Sector H9.

The notification warns the party that all rules and regulations must be followed while staging the demonstration.

In anticipation of disturbance by protesters, Islamabad's district administration sealed the Red Zone and placed containers at the entry points of the federal capital.

Personnel of law enforcement agencies including anti-riot force, Rangers, FC and police have been deployed around the Red Zone.

In a press conference a day earlier, Interior Minister Rana Sanaullah warned PTI of strict action against those who would try to enter the Red Zone.

“PTI wants to spread chaos in the name of the protest,” the interior minister said, revealing that the coalition government has "received reports" and has found statements of Khan and Fawad Chaudhry regarding their plans of creating an anarchic situation outside the election commission.

He said that the PTI can attack the election commission; however, they should remember that the Islamabad High Court has imposed restrictions on staging protests in the Red Zone.

The protest comes after the ECP  Tuesday announced the verdict on the PTI's prohibited funding case — which was earlier referred to as the foreign funding case.

As per the 68-page order, the commission states that the Imran Khan-led PTI did indeed receive funding from foreign companies and individuals, which it hid.

The commission found that donations were taken from America, Australia, Canada and the UAE.

PTI received funds from 34 individuals and 351 businesses including companies, the ECP verdict states.

Thirteen unknown accounts have also come to light, said the commission in the verdict, adding that hiding accounts are a "violation" of Article 17 of the Constitution.

The funds were also in violation of Article 6 of the Political Parties Act.

Moreover, the ECP found that PTI Chairman Imran Khan submitted a false Nomination Form I and that the affidavit provided regarding party accounts was false.

For now, the ECP has issued a show-cause notice to the party to explain why the prohibited funds should not be confiscated.